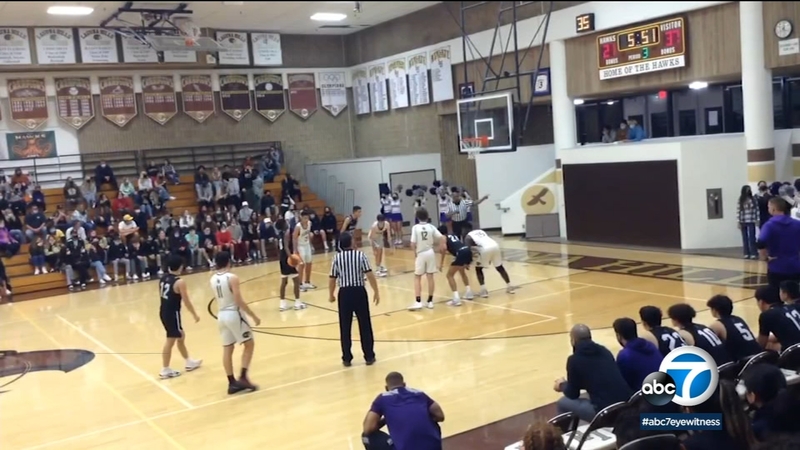 LAGUNA HILLS, Calif. (KABC) -- An investigation is underway after a Portola High School basketball player was the target of racist slurs during a game in Laguna Hills last week.

According to a statement issued by the Saddleback Valley Unified School District on Tuesday, "inappropriate and inflammatory racist comments" were made by a Laguna Hills High School student during Friday's match-up against Portola.

The student was attending the game and began making comments toward Portola player Makai Brown.

The student was heard in the video shouting, "Where is his slave owner?" and "Chain him up! Chain him up!" as Makai was shooting free throws. Other racial slurs were also directed at Makai.

Makai's mother Sabrina Brown said her son discovered the video the next day as he was looking at game footage.

The mother claims that the administration at Laguna Hills High has tried to suppress the video.

"It's deeper than just what that child was saying. Their culture just seems to be broken to where it's just not an environment that feels safe, at least safe for us," said Makai's father Terrell Brown.

The Browns say the most difficult part is the impact it's had on their son.

"He just has this pessimistic view of 'It is what it is. I'll just move on to the next one,'" Terrell Brown said. "Our job as parents is to teach him that you're never going to allow someone just to bully you. You can stand up and you can impact change."

"The language and connotations expressed by the words used do not represent the culture, attitudes, or feelings of the students and staff of LHHS, nor those of Saddleback Valley Unified School District (SVUSD)," said the district.

The district said the Laguna Hills student has since been disciplined.

"Although apologies are necessary, they do not suffice," said SVAUSD Superintendent Dr. Crystal Turner. "The words used by this student will never be acceptable. This is a learning opportunity for our school communities that there is ongoing work to be done in building continued mutual respect and understanding. Administrators from LHHS and PHS will continue working together to use the incident to teach, learn and heal."

"This isn't the end. This is just the beginning of the work that's ahead of us and for Laguna Hills High School, of the city of Laguna Hills, Saddleback Unified, fix yourself," Irvine Mayor Farrah N. Kahn said at the meeting.

Makai's mother made an emotional public plea before the city council.

"Please do your part and show him that he's wrong ... and that change in this community and in the world is still possible," she said.

The Browns say they hope Saddleback Unified will enact some type of reform that will bring about the change they want to see.

A mother has been charged after allegedly instructing her daughter to hit a fellow basketball player during a youth basketball game in Garden Grove.