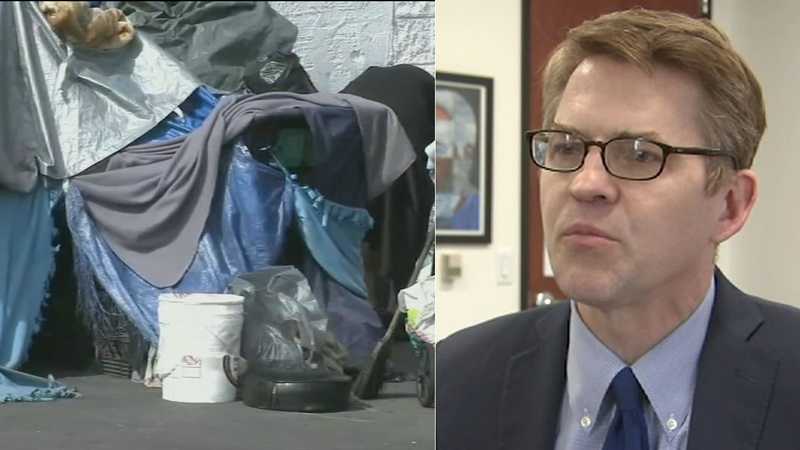 LOS ANGELES (KABC) -- The man in charge of the top homeless services agency in Los Angeles is stepping down after five years in the role.

Peter Lynn's resignation from the Los Angeles Homeless Services Authority (LAHSA), which is tasked with addressing the crisis, was announced Monday as the region continues to see increasing rates of homelessness.

Heidi Marston, LAHSA's chief program officer, will serve as interim executive director when Lynn officially leaves the post at the end of this month, according to a press release. A national search will be conducted to find a permanent replacement.

"It has been a tremendous privilege to lead this organization over the past five years," Lynn said in a written statement. "I believe that LAHSA is stronger than it has ever been, and I have complete confidence in our management team and our Chief Program Officer's ability to lead the organization during this transition. Los Angeles has a serious challenge ahead in addressing our region's homelessness crisis. It will take the combined efforts and resources across all levels of government, but LAHSA has never been better positioned to bring our neighbors home."

Lynn said he has mixed emotions about his departure. He expressed gratitude to voters who helped pass Measure H and HHH.

But he was also candid about the toll the job took on him and how personal the issue became. Lynn said he tried to help a man who was homeless and slept just outside their building but said he is one of few who refused the help. The man was later hospitalized and after refusing additional care, died.

Lynn would visit him in the hospital and take him the newspaper - one of the things he would accept.

A reason for Lynn's departure was not given but the Los Angeles Times reported on growing frustrations amid a 33% increase of homelessness in L.A. during his tenure.

The agency attributed the successful housing of more than 80,000 people, among other achievements, to his leadership.

In a statement, Los Angeles County Supervisor Janice Hahn reflected on the agency's expansion from a "relatively small agency managing shelters" to a "multi-million dollar organization" under Lynn.

"This was never going to be an easy task but, nevertheless, he welcomed the challenge and his leadership of the agency was important, necessary, and appreciated," Hahn said. "Homelessness across L.A. County has become more entrenched and more dire. This crisis demands a new approach that rises to the magnitude of this problem. It will be up to the next leadership at LAHSA to build on Peter's work and ensure this agency can meet this challenge."
Report a correction or typo
Related topics:
societylos angeleslos angeles countyhomeless in southern californiahomeless
Copyright © 2022 KABC Television, LLC. All rights reserved.
HOMELESS IN SOUTHERN CALIFORNIA
Montebello opens largest tiny home village in San Gabriel Valley
Homeless man in wheelchair hospitalized after being shot in South LA
Shelter named after late 'Jeopardy' host Alex Trebek opens its doors
New homeless shelter named after late 'Jeopardy' host Alex Trebek
TOP STORIES
Kidnapped SoCal teen found in NY thanks to quick-thinking detective
FTC warns about baby formula scams on the rise amid shortage
NY high court to determine if Bronx Zoo elephant is a person
Rihanna and A$AP Rocky welcome their first child
CDC advisory panel greenlights booster shots for children ages 5 to 11
16-year-old girl stabbed by classmate in Montclair, police say
$45,000 reward offered in case of teen killed in Inglewood shooting
Show More
Nipsey Hussle case: Judge sets alleged killer's trial date for June 2
Controversy surrounds Villanueva over campaign ad filmed in church
House passes terrorism bill after shooting in Buffalo, New York
More than 50 brown pelicans found injured, sick or starving in SoCal
LAUSD gets more than $44M in grant funds for under-resourced campuses
More TOP STORIES News