"It's humans moving into bear habitat that's changing their behavior and hibernation cycles," an expert says.
KGO
By Karina Nova 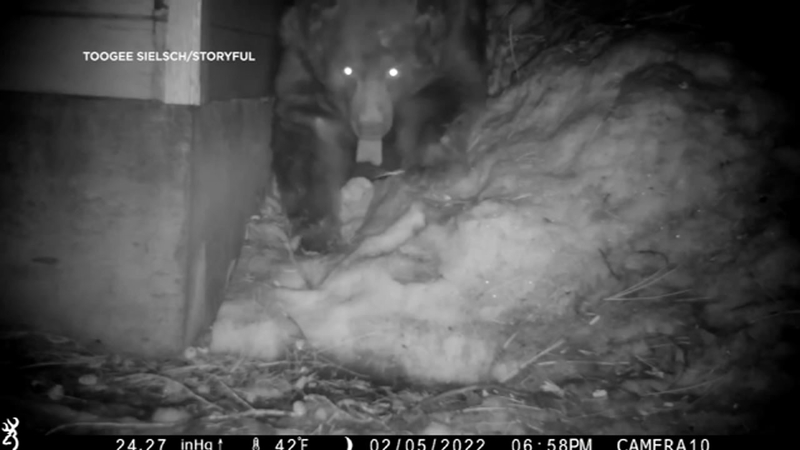 LAKE TAHOE, Calif. -- A viral video of a Lake Tahoe bear awakening from hibernation in the middle of winter may be problematic, according to one expert, but not for the reason that many speculated about online.

The video shows a bear waking up, climbing out of its den and looking around. As many of us learned in grade school, this is a time when bears are supposed to hibernate and sleep through the winter.

Many online observers wondered if the milder than normal winter weather in Tahoe was to blame, possibly messing with the bear's biological clock.

But this behavior is not that uncommon according to Ann Bryant, the Executive Director of the Bear League in Tahoe, and it doesn't have to do with the warmer weather.

The record-breaking heat drove a family of mother bear and cubs to seek relief in the cool waters of South Lake Tahoe, California.

"Some of the bears are not necessarily totally coming out, they have always come out sometimes on a nice day to roll around in the snow and stretch out. They don't hibernate as deeply as squirrel. So it's not unusual to come out and roll around," she explains.

The California Department of Fish and Wildlife says about 15 percent of the bears in Tahoe show some activity during the winter months, while most hibernate for 2-3 months.

But one thing that can mess with bear hibernation patterns has been exasperated by the pandemic: the presence of human food.

"What we don't want is when they come out and smell a garbage can or a bird feeder down the street and they start eating because they don't go back into the den."

According to Bryant, as more people permanently moved into the Lake Tahoe during the pandemic, bears got more access to human food because the new residents were not as familiar with how to secure their food from bears.

"It's not hide your food, it's secure it so they can't get at it. They know there's food here because there's people here. If we have our houses secured, lock our doors, lock our windows, don't have food in the car, get a bear-proof garbage enclosure, then they can't get the food. They'll give up and go back to sleep and that's the goal. A lot of people aren't doing that," she explains.

RELATED: Family of bears cools off next to crowd of people at South Lake Tahoe beach
EMBED More News Videos

A pair of bear cubs took advantage of the fresh powder in South Lake Tahoe as they wrestled around in the snow.

Bryant emphasizes that if residents don't take measures to address this issue it can lead to bigger problems.

One example is a situation currently unfolding in South Lake Tahoe, where a bear has become reliant on human food. He has been known to break into homes and garages in the Tahoe Keys neighborhood.

The California Department of Fish and Wildlife Supervising Wildlife Biologist, Jason Holley, says they've tried working with residents to properly secure their food and have tried relocating the bear, but he keeps coming back.

So Holley says the department will have to euthanize the bear as a last resort.

RELATED: Bat ray seen in Oakland's Lake Merritt could actually be a good sign for the environment

Holley says bears that are not "severely habitual" will be tagged, hazed and released to a nearby habitat.

While the Bear League disagrees with that decision, one thing it does agree with the state on, is that people need to know exactly what to do with their food products to prevent further disruption of bear behavior.

"It's humans moving into bear habitat that's changing their behavior and hibernation cycles, unfortunately. They're carelessly going about their daily lives without any regard for the fact that they've come to bear country, and what their actions are doing is damaging these animals that live here and that's a shame," Bryant says.