Could small gatherings of Dodger, Laker fans be contributing to rise in LA County COVID-19 cases?

COVID-19 cases in Los Angeles County are on the rise, described as a gradual up-tick Thursday by the county's chief science officer. Officials say watch parties for the NBA and MLB playoffs could be playing a role.
KABC
By Josh Haskell 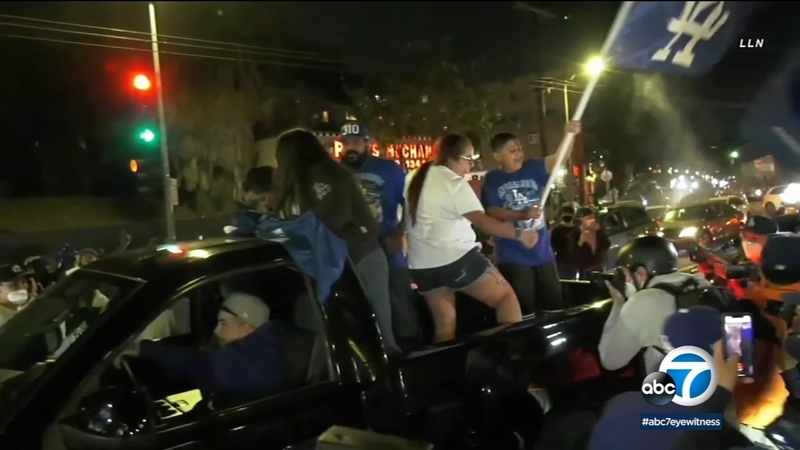 Could small sports gatherings be contributing to rise in LA County COVID cases?

LOS ANGELES (KABC) -- COVID-19 cases in Los Angeles County are on the rise, described as a gradual up-tick Thursday by the county's chief science officer. Officials say watch parties for the NBA and MLB playoffs could be playing a role.

The county reported 25 coronavirus-related deaths Thursday and 2,065 new cases, compared to Wednesday, which saw 22 deaths and 1,843 cases. The culprit could be small sports gatherings.

"The great success of our sports teams, the Lakers and the Dodgers, and both watching those games and the celebrations that happened afterwards leads off into gatherings," said Dr. Simon, the county's chief science officer. "We're not seeing any sort of sector, workplace or other sector, that would explain this very slow, gradual increase. What we think may be happening is that there are more gatherings."

Gatherings over national holidays have been tied to a rise in cases in the past, but it has been two months since Labor Day. The Department of Public Health is discouraging gatherings over Thanksgiving and the December holidays.

"Natural for people to think that if they're around folks they know that somehow they're safer than being around folks they don't know, and unless you're pretty certain that the folks you know have not been doing anything to place themselves at risk, I think there's a false sense of security," said Dr. Simon.

This comes as the United States hit 100,000 new COVID-19 cases in a single day on Wednesday.

"I remember Dr. Fauci probably three, four months ago when we were down at 40,000, 50,000 cases a day saying if we don't start to do things differently, we're at some point in the not-distant future going to hit 100,000 cases a day, and I don't think maybe people necessarily thought that prospect was possible," said Dr. Simon.

The L.A. County Department of Public Health said the county is also experiencing a slight up-tick in the positivity rate.

One Lakers fan got a little carried away with celebrating the team's championship victory near the Staples Center, hanging high above the ground from a streetlight and then dropping into the crowd.