Lancaster gunman shot wounded man in head while victim was on phone with 911; $20K reward offered 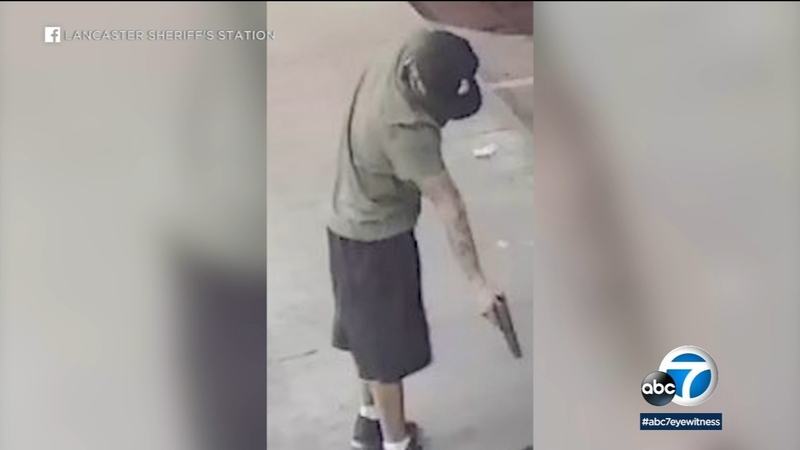 LANCASTER, Calif. (KABC) -- Authorities are asking for the public's help in identifying a gunman who shot a man at point-blank range while the victim was on the phone with a 911 operator at a gas station in Lancaster.

The incident began as a car-to-car shooting shortly after 3 a.m. on Dec. 3, according to the Los Angeles County Sheriff's Department.

The victim, later identified as Jason Castillo, was initially shot while in his vehicle near the intersection of Challenger Way and Avenue K, investigators said. The wounded Castillo was able to make his way to a nearby Shell gas station and called 911.

As the wounded man was lying on the ground, "the suspect drove around, approached Mr. Castillo and shot him point-blank in the head," the Sheriff's Department said in a statement. The second shooting was captured on surveillance video, whose still images were publicly released.

The suspect fled the scene and remains at large. He is described as a Hispanic man wearing a green T-shirt, black baseball cap with an "LA" logo, black shorts, white socks and black shoes.

Lawtis Rhoden has an extensive criminal record, including multiple sexual assault convictions. With his recent release from prison, people who live near Palmdale are concerned that he may be living in their community.

He was driving a white four-door BMW sedan, possibly a 3 series, with tinted windows and gray rims, authorities said. The vehicle has major traffic collision damage to the front driver-side headlight and front fender on the passenger side.

L.A. County Supervisor Kathryn Barger announced a $10,000 reward in the case, and on Jan. 20 the city of Lancaster matched that amount, bringing the reward total to $20,000.

"The victim himself seems like a family man, no criminal history," Phillips said. "We're really kind of stuck right now as to why this senseless, violent act would even take place."