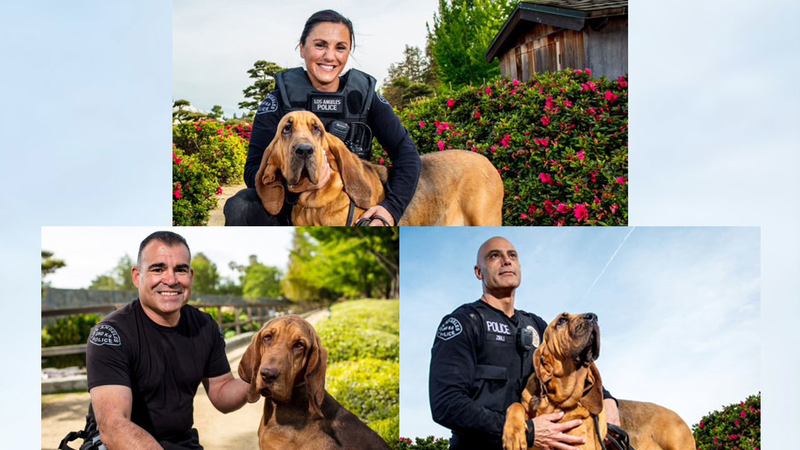 It was January of 2017 and they were hot on the trail of a killer. Vinh Dao had just stabbed two men to death during a card game inside the Hop Sing Tong social club. Officer Clarke and her K-9 tracked a fresh trail of blood north on Hill Street.

But where was Clarke's back-up? A tactical team was supposed to be at her side because the K-9 handler must focus on the dog -- and use both hands to control and interpret its movements.

"I'm kind of looking over my shoulder, come on tactical team - you should be a lot closer than you are," Clarke tells Eyewitness News. "Before I know it my dog makes a right hand turn and we go into a very dark alcove."

That video clip from Air 7 helped a jury conclude that K-9 handler Clarke was a victim of sexual harassment by LAPD Sergeant Joe Danny Garcia - and that she and two co-workers suffered retaliation for blowing the whistle.

"I remember rage just going through me because I'm thinking, wow - that never should've happened. There's no reason these guys are this far behind me."

Clarke and her two male colleagues on the K-9 unit won more than $10 million in a lawsuit against the LAPD. Clarke agreed to settle the case before trial for $1.6 million and retire on the condition she could keep her bloodhound Gemma.

Officers Elliot Zibli and David Dooros went to trial and won $8.6 million from the jury this week after proving they'd reported the sexual harassment of Clarke by Sergeant Garcia up the chain of command and suffered retaliation for it.

"I've lost my life," Officer Dooros says of the end to his 29-year career with the LAPD. "I grew up in the city, that's all I ever wanted to be was an LAPD officer."

"He'd get right up behind me," says Clarke. "Really close, bumping into me all the time, shoulder to shoulder all the time.

After repeated complaints, Sgt. Garcia was transferred to a coveted position at LAPD's Internal Affairs which investigates misconduct. But Clarke, Dooros and Zibli say the hostile environment at the K-9 unit only got worse.

One example? The officers say they were being dispatched with new bloodhounds who were not fully trained - not ready to track a child who may be lost or a murderer on the run. They say higher-ups were denying them crucial training.

"I felt lost... I felt like I was just out there winging it," says Dooros. "I was trying my best, doing my best, but I felt threatened every time my phone rang."

"We don't have the luxury of making a mistake, we can't be wrong," says Zibli. "We don't know what's around that corner, it's a blind corner and we're looking for a double murder suspect."

The killer Officer Clarke was tracking that day, Vinh Dao, was ultimately caught and convicted of the double murder. He's expected to be sentenced later this month.

Sergeant Garcia has denied that he sexually harassed Clarke or retaliated against any of the three K9 officers.

An LAPD spokesperson declined to comment on the case or whether the $10 million judgement would lead to any internal review of the officers' allegations of sexual harassment and retaliation.

A spokesperson for the Los Angeles City Attorney's Office tells Eyewitness News they are reviewing their options, including a possible appeal.

The three officers are devastated by the way their careers ended too early, but hopeful their lawsuit may lead to reform.

"We did everything we were supposed to do and suddenly we had the whole department turn on us for reporting it," says Zibli.