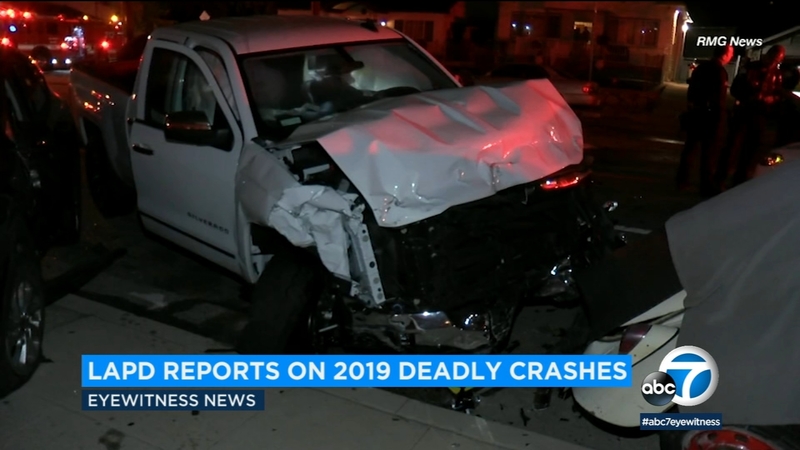 LOS ANGELES (KABC) -- Los Angeles Police are urging for safe driving after a year that saw a staggering number of traffic deaths, car crashes and fatal hit-and-run collisions across the city.

At a press conference Monday morning, the Los Angeles Police Department addressed the 236 traffic deaths and over 54,000 crashes that occurred in 2019. The city saw a 32% increase in fatal crashes in the last five years, police said.

An Eyewitness News analysis of LAPD collision data shows a 7% increase in fatal hit-and-run crashes in the last year.

The family of two young men who were killed in a hit-and-run crash in May also spoke at the conference.

Brothers Jesse Felix Zuniga, 19, and Benigno Felix Zuniga, 25, were in a car that was struck by a truck that was traveling at high speeds in the Highland Park area.

"It's important that you don't drink and drive, and if you do cause an accident, just stay," said Viviana Martinez, the girlfriend of one of the victims. "Because you don't know whose life you're ending."

The suspects got out of the truck and ran off after the crash, police said. While officials believe they know who the suspects are, they haven't been able to charge them with a crime.

A large part of the fatal crash increase in the city also involves pedestrians, police said. Almost two-thirds of traffic deaths in 2019 involved pedestrians, according to LAPD collision data.

LAPD also said about half of pedestrians don't use crosswalks when crossing the street, and could be at fault if they were involved in a crash.

"The key for hit-and-runs, for me, is this: it's an accident, don't make it a crime," said LAPD Chief Michael Moore. "Many times, when we see collisions involving pedestrians or other motorists that turn into a hit-and-run, the person who is actually at fault may not be the person who flees the scene. And yet that person fleeing the scene is now committing a felony."

INTERACTIVE MAP: Number of fatal or severe injury crashes in Los Angeles communities in 2019
The darker/redder the color, the more crashes resulted in death or severe injury. Click an area to see a breakdown of different types of car crashes.

Police are aiming to decrease traffic deaths in the new year, reminding drivers how dangerous traveling around New Year's Day can be.

LAPD is also focusing on six dangerous intersections in West LA that have seen a spike in violent crashes.

Moore also noted that people should not only drive defensively, but also walk defensively if you're a pedestrian.

INTERACTIVE MAP: Number of fatal or severe injury crashes in Southern California Zip Codes in 2018
The darker/redder the color, the more crashes resulted in death or severe injury. Click an area to see a breakdown of different types of car crashes.