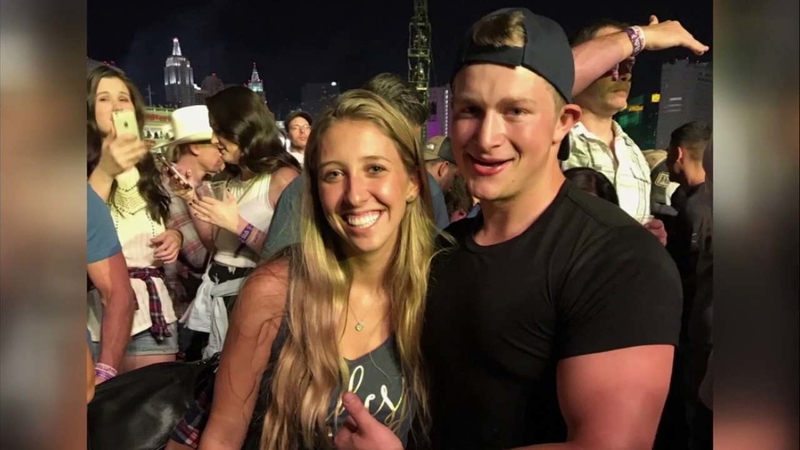 LAS VEGAS (KABC) -- A Tujunga man used his training as an emergency medical technician to help save the lives of 10 people at the scene of the Las Vegas mass shooting.

Matt Cuddihy captured video of concertgoers enjoying the music festival before the shooting began. In the footage, Jason Aldean is on stage. Cuddihy pans the camera to show his new friend, Katrina Hannah of La Verne.

Cuddihy and Hannah met on day one of the Route 91 Harvest Festival and instantly became close. Cuddihy came to Vegas with his family to enjoy the music.

In the middle of a song, the gunfire began. Cuddihy says he didn't panic at first.

Then, Aldean left the stage and the shots grew louder.

"I look around and I just see a few people drop to my right. To my left, I see more people drop over there. And then I look down and I see Katrina on the floor, and I knew this is real," Cuddihy described.

Cuddihy, who is studying to become a firefighter, has been trained as an EMT.

"The 'scared' turned off in me on the spot, and it was go-to-work time," he said.

MORE: Musician recalls hiding under stage during Vegas shooting and running for safety

He told everyone to get down and not to run away.

"Everyone that was running was dying," he said.

Cuddihy noticed that Hannah was shot in the neck and the shoulder.

"Right away, I identify the bleed, I threw off my shirt, I apply a dressing," he recalled.

"I look over to my right and I see this guy shot to the head, gone. He's obviously deceased. So what I do is I pull him towards me, cover me, cover Katrina. Now, I have this guy, this dead guy, now on my back protecting me from incoming bullets," Cuddihy said.

Cuddihy saw so many others in need of help, he had to leave Hannah to get to them.

"Having to leave her was probably the worst thing I've ever gone through in my whole entire life," Cuddihy said.

He moved through the crowd, placing tourniquets on nine people, saving their lives.

"I army-crawled over to this guy, took off my belt and tourniqueted him real fast. And then I kept on crawling, over literally two or three dead people," he said.

Sadly, he couldn't save everyone. Three people died in his arms.


"This family that was there. It was two parents and their daughter, I suppose, who was on the floor, and she had a bullet straight to the head and half her head was missing, and they were telling me they needed help for their daughter, and it was the hardest thing to tell them that there's nothing I can do, they need to get out of there. Their daughter is dead," he said.

Later, Cuddihy was relieved when he spotted his own family. They were OK. They are also trained EMTs and were helping others as well.

As for Hannah, a Marine she'd never met before named Austin Cox carried her to safety and escorted her to Sunrise Hospital.

"I thank him for saving her life, and she probably wouldn't be there if it wasn't for him," Cuddihy said.

Inside the hospital, Hannah wrote this: "Matt save me."

Wednesday, Cuddihy was at Sunrise Hospital to show his support.

He is now rethinking his career. This festival convinced him to become an Army medic.