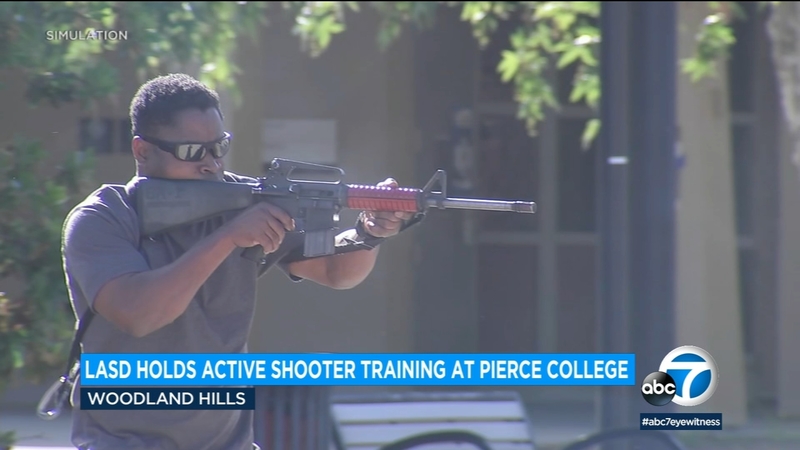 This was just a drill but deputies say the functional training is critical for real-life scenarios.

It has become an all-too-common scenario - an active shooter threatening innocent lives - and that's why training like this is so important.

It was the first such training in two years, as COVID-19 precautions prevented the large-scale exercises.

In one scenario, sheriff's deputies scramble to Pierce College when shots ring out.

"You're going to see literally from start to finish someone firing weapons," Captain John Gannon said. "We're going to have some people down. There will be a retreat into the library where I expect my people to actively pursue him."

Training like this is critical for law enforcement. Getting different elements of the department working together in a crisis takes practice.

A threat of a school shooting posted on social media led to panic on an Antelope Valley campus, and the initial response from authorities prompted criticism from parents.

"This is a perishable skill. You have to continue to practice it so when something really happens, you react almost instinctively," Gannon said. "You shouldn't have to think about it. My people should immediately know exactly what to do and how to move in to take people and bring them out of harm's way."

Deputies use simulators to practice how engaging with a suspect can make a bad situation better, or much worse.

Dealing with mental-health cases are becoming much more common especially since the start of the pandemic, which makes training so important.

"I think it's a combination of everything," Lt. Anna Denise Briz said. "Definitely the pandemic was a trigger for a lot people."

For deputies and police, talking to and understanding a suspect are becoming critical tools of the trade.

Briz says the goal is "to treat anyone the way we would want to be treated, with compassion, with respect."

But when shots ring out and people are hurt, first responders have to shift into a different gear.