Lentrail Hicks was stabbed to death in the Florence/Firestone area in November 2020.
KABC
By Sid Garcia 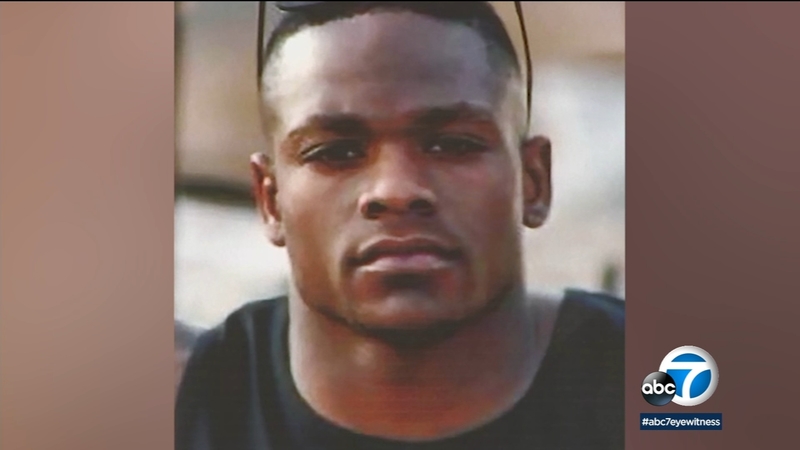 SOUTH LOS ANGELES (KABC) -- In a heartfelt plea, Paula Stringer went before the press on Thursday asking for help in finding the people who killed her son, Lentrail Hicks.

"I just need you guys to turn yourself in or if whoever knows or seen anything to come forward," she said.

Surveillance video released by Los Angeles Sheriff's Department homicide investigators shows Hicks walking down Compton Avenue near 68th Street around noon that day wearing a white T-shirt and a cap. In the video, Hicks is seen getting into an argument with two men.

Homicide Bureau investigators at #LASD are asking for the public’s help with information to help identify two suspects and a suspect vehicle involved in a homicide in #Compton.

Please call if you have info about the case or you can ID the two suspects or the vehicle.#Wanted pic.twitter.com/GJMg3WxOoI

The argument lasts for a short while, then, minutes after it happened, the two suspects get into a black Toyota Prius and speed back to attack Hicks.

"[Hicks] ends up going home to his mother where he informs her he's been stabbed and she calls 911," said Lt. Derrick Alfred with LASD's homicide bureau.

Hicks died a couple of days after he was stabbed on Nov. 9. Now, it's been nearly a year and a half since the murder, and there's now a $20,000 reward for information leading to an arrest.

Investigators believe the suspects live in the neighborhood near where the incident took place. Meanwhile, Hicks' family says he leaves a great void.

When Hicks was in college a few years ago, he played college football at West L.A. College. He then transferred to Tuskegee University in Alabama to play football there.

The 31-year-old leaves behind his girlfriend and their 6-year-old daughter.

"He didn't deserve this. He was a college grad. He was a great Tuskegee football player. He loved his daughter more than anything in the world," said Hicks' girlfriend Keilah Duren.

"I'm not angry, I'm more hurt than anything. The anger has passed," said Stringer. "My son was a loving father, a devoted brother, a loving son and he did not deserve this."

Anyone with information is urged to contact the LASD's homicide bureau.