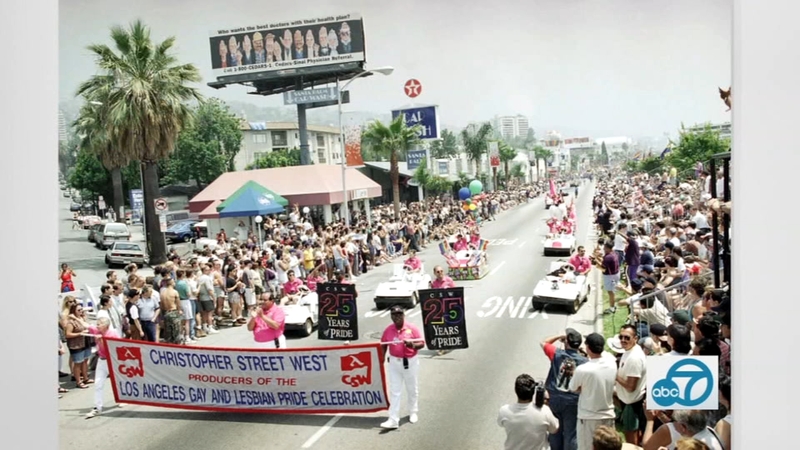 LOS ANGELES (KABC) -- For the last five decades, our LGBTQ+ community has come out to celebrate themselves and each other in the Christopher Street West Pride Parade, popularly called the L.A. Pride Festival and Parade. But for this community, showing their pride has not been easy. We're taking a short look back at their courageous and inspiring L.A. history

ONE ARCHIVES AT USC LIBRARIES

Long before the Stonewall riots in New York City in June, 1969, the gay rights movement was rising up right here in Los Angeles. Stonewall uprising was a series of violent confrontations between police and gay rights activists outside the Stonewall Inn, a gay bar in Greenwich Village that some say marked the beginning of the international gay rights movement. But the Mattachine Society, founded in 1950, is considered one of the earliest gay rights organizations in the United States, headquartered here in L.A. and founded by activist Harry Hay. A plaque commemorates the Silver Lake stairs that lead to the original meeting place at Harry Hay's home.

Thanks to ONE Archives at USC Libraries for sharing so many photos of the events during this era. The ONE National Gay & Lesbian Archives at USC is the largest repository of Lesbian, Gay, Bisexual, Transgender, Queer (LGBTQ) materials in the world. It was founded in 1952 and currently houses over two million archival items including periodicals, books, film, video and audio recordings, photographs, artworks, organizational records, and personal papers. https://one.usc.edu/

THE BLACK CAT
It was the raid at The Black bar in Silver Lake on New Year's Eve, 1967, that would set off a chain reaction of activism here in L.A. Alexei Romanoff was compelled to organize the first LBGT protest in the U.S. The Black Cat still stands today at 3909 W. Sunset Boulevard in Silver Lake.
https://www.theblackcatla.com/

The world's first lesbian and gay synagogue named Beth Chayim Chadashim ("House of New Life") formed in 1972 and used the Metropolitan Community Church to congregate. The Beth Chayim Chadashim broke ground on a new building in 2010 that is still their home today, 6090 W. Pico Blvd. in West L.A. https://bcc-la.org/

JEWEL THAIS-WILLIAMS
Jewel Thais-Williams is considered a hero. She changed nightlife for black gays in 1973, with the opening of Catch One, the first black gay disco in Los Angeles. The documentary "Jewel's Catch One" celebrates four decades of music, fashion, celebrity and activism that helped break down racial, social, and cultural barriers. Jewel registered also studied Traditional Chinese Medicine and earned a Master of Science degree in Oriental Medicine, and is currently a Licensed Acupuncturist and Herbalist, in her own clinic, The Village Health Foundation.
http://www.jewelscatchonedocumentary.com/
http://www.villagehealthfoundation.org/

BLACK AIDS INSTITUTE
Phill Wilson recalls the time before there was even a test for HIV/AIDS. Today, Wilson is President and Chief Executive Officer of the Black AIDS Institute, the only national HIV/AIDS think tank focused exclusively on Black people. Since its founding in 1999, the Institute's mission has been to stop the AIDS pandemic in Black communities by engaging and mobilizing Black institutions and individuals in efforts to confront HIV. https://blackaids.org/phill-wilson/

CHILDREN'S HOSPITAL L.A. TRANSYOUTH HEALTH & DEVELOPMENT
There have been many medical and social adveancements in the community, there's one group that continues to be marginalized. But at the Center for Transyouth Health and Development at Children's Hospital Los Angeles, they are dedicated to providing affirming care for transgender and gender diverse children, adolescents, young adults and their families. As one of the oldest and largest transyouth programs, the Center partners with youth and their families to advance the field through innovative practice, training and research. https://www.chla.org/the-center-transyouth-health-and-development

TRANSLATINA COALITION
The TransLatina Coalition was formed by Trans Latina leaders in 2009 to organize and advocate for the needs of Trans Latinos who are immigrants and reside in the US. We talked to the President and CEO, Bamby Salcedo, who is committed to continuing to provide critical and life-saving procedures for the community.
https://www.translatinacoalition.org/

LGBT CENTER
2019 marks the 50th anniversary of the Los Angeles LGBT Center, the first and largest of its kind in the world. Lorri Jean heads the L.A. LGBT Center, where they are dedicated to serving the LGBT community with social services, health services, substance abuse programs and more. The Anita May Rosenstein Campus is their new flagship facility which houses 100 beds for homeless youth, a senior center and an educational academy. https://lalgbtcenter.org/