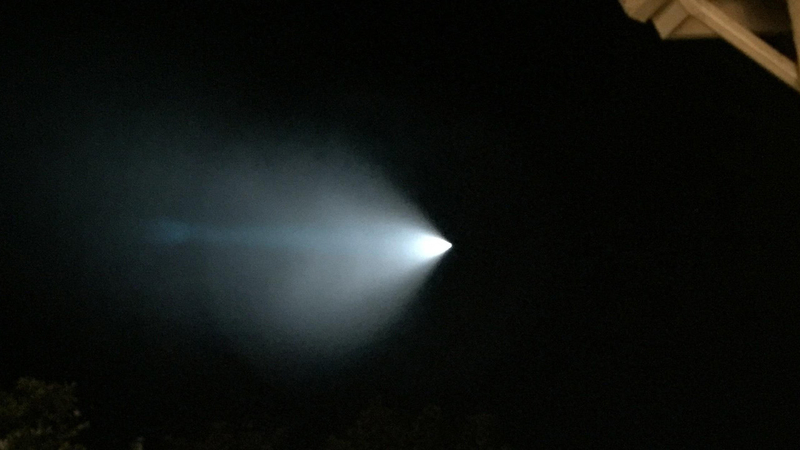 LOS ANGELES (KABC) -- A missile test flight from a submarine left hundreds of people from Southern California to Nevada and Arizona perplexed as it caused a bright light to streak across the sky Saturday night.

The Pentagon issued a statement that the Navy Strategic Systems Programs conducted a scheduled test of a Trident II (D5) missile from USS Kentucky, an Ohio class submarine.

The missile was not armed, according to the statement, and tests are conducted on a frequent, recurring basis to ensure reliability of the system.

Residents from Ventura to as far as Nevada and Arizona took photos and videos of the strange phenomenon around 6 p.m.

It is unclear if the flight diversions of Los Angeles International Airport planes over the Pacific has to do with the missile tests.

The Orange County Sheriff's Department tweeted earlier in the evening that the light was a test conducted by the U.S. Navy off the coast.

#OCSDPIO: Light seen in OC sky was confirmed through JWA tower to be a Naval test fire off the coast. No further details.

The Malibu-Lost Hills Sheriff's Station also tweeted that there were military exercises being performed off the coast of Catalina Island, while an astronomer at Griffith Observatory said the object could have been a comet or meteor.

#LATraffic Alert. Military exercises off of Catalina Island. Lights and lasers can be seen from beach and coastline. No need to call 911

Jonathon Payne said the light, believed to be a single comet, was a precursor to the Taurid meteor shower that is expected this month. When a comet comes into the atmosphere, it is normal for there to be a white light and then a blue and green streak, according to Payne.

Vandenberg Air Force Base did not launch any rockets Saturday evening, according to a representative.

Twitter users became engaged in a heated debate over the origins of the bright light, claiming it was not a missile test but that it could have been a UFO or a comet.

Can someone explain what this bright light over LA's sky is? @ABC7 pic.twitter.com/Rddvjnf9Tt

@ABC7 this was the beginning of it thought it was a shooting star #abc7eyewitness pic.twitter.com/3l3jRIeZJd