Omar, Joseph and Raihan Awaida, were trick-or-treating in Long Beach when a suspected drunk driver hit and killed them.
KABC
By Jaysha Patel 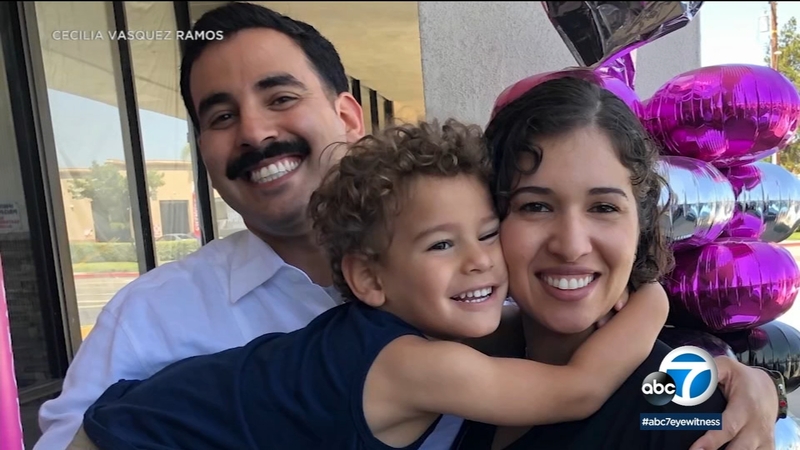 LONG BEACH, Calif. (KABC) -- A family of three was killed after being struck by a suspected drunk driver while they were out in Long Beach on Halloween night in 2019.

3-year-old Omar and his parents, Joseph and Raihan Awaida, were trick-or-treating near Los Cerritos Park in Long Beach.

"Joey, my nephew, was just an incredible human being. Kind, friendly, a good listener. He was a giver, always put other people's interests and needs first, and his wife, Raihan, was the same. She was a social worker," said Cecilia Vasquez Ramos, Joseph Awaida's family member.

Vasquez said Joseph Awaida was studying to be a doctor at California State University Long Beach. She said Omar Awaida was ball of energy, a loving boy just like his father.

Carlo Navarro, who was 20 years old at the time, was driving under the influence in a Toyota Sequoia according to prosecutors who say a sobriety test was taken that night.

They said Navarro was driving on Country Club Drive after getting a bottle of alcohol at a local liquor store. Video in court showed him getting the bottle.

He crashed into the family while they were walking home.

The Awaida family was emotional Thursday during opening statements and testimony, reliving the deaths of their three loved ones.

Vasquez said Omar, Joseph and Raihan Awaida were celebrating Halloween at her house the night of the accident.

She said soon after they left to go to their own home, she heard a loud sound. She said something told her to check on the family. After driving to their house and multiple missed calls, she noticed police lights.

"I just prayed that he'd come out and laugh at me and say I was just being a nervous nelly, but he never came," Vasquez said.

In court Thursday, police body camera and surveillance images showed the street Navarro was driving on, as well as Joseph and Raihan Awaida's bodies on the street. Omar was reportedly lying under a car across the street.

Witnesses recalled seeing Navarro speeding, driving onto the sidewalk and hitting the family.

"I'm so happy that the last thing I said to them was that I love them, and I kissed them. And the stroller went around the corner and then I never saw them again," Vasquez said.

The family said they're hoping for justice and that the trial is wrapped up before July 4.