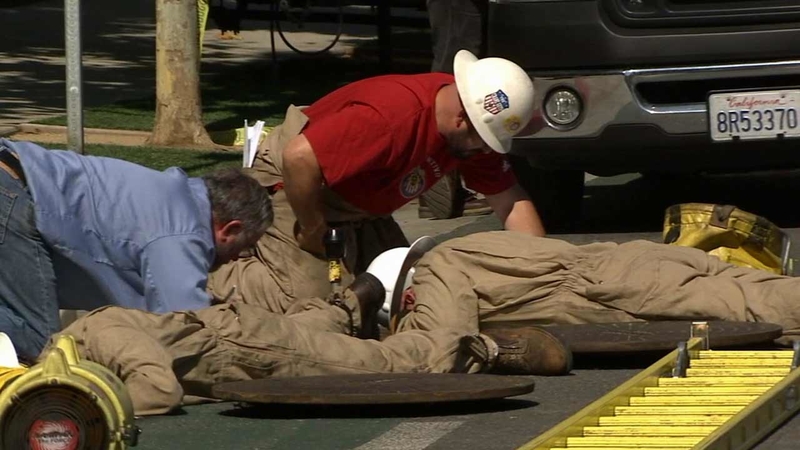 LONG BEACH, Calif. (KABC) -- Thousands of Long Beach residents are without electricity for a second day as crews struggle to end a blackout caused by fires in three electrical vaults.

Meanwhile, Thursday was a day filled with traffic congestion and frustration for residents who spent the night and day without power.

"It was really hot and miserable and noisy because we slept with the door open and all the workers were there," said Helen Quintana.

An underground vault explosion blew off manhole covers in downtown Long Beach at about 3 p.m. Wednesday, and caused a chain-reaction that cascaded to two additional vaults.

Initially, 4,800 people were without power following the fire on Wednesday. As of Thursday afternoon, 2,700 Southern California Edison customers from 10th Street to the ocean and from Magnolia Avenue to Alamitos Avenue remained in the dark.

Spokesman Paul Grigaux says utility workers hope to have the juice mostly restored overnight but some customers could be without electricity well into Friday.

UPDATE: No full restoration time has been determined yet. About 200 to 2,700 #LongBeach customers may be without power overnight.

Many businesses in downtown Long Beach were forced to close their doors. Some restaurants chose to improvise. Shannon's Irish Pub pulled out a gas grill to cook customers lunch.

"We have a place next door where we do a barbecue every so often for events and things like that, so we felt this would be a great opportunity to take advantage with the power being out like this," operations manager Varouj Shekerdemian said.