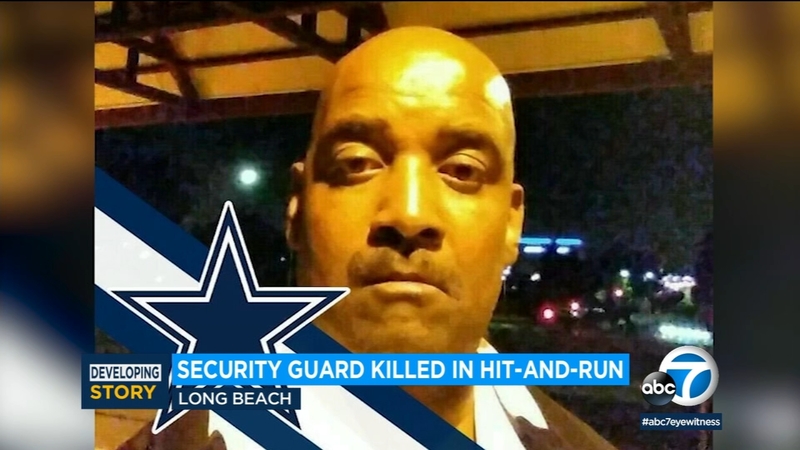 LONG BEACH, Calif. (KABC) -- Authorities are still searching for the hit-and-run driver who slammed into the guard shack at a Long Beach housing complex and killed the security guard inside.

Residents of the complex described the guard, 54-year-old Derrick Smith of Los Angeles, as a friendly man who was always smiling, and worked several jobs to support his family.

"He was an amazing man," said one resident. "He took the bus to work every day. He had more than one job. He was a father. He was a loving man that just did not deserve something so senseless."

"I plead to the public, if you know anything or know the man who did this, please report him because this man lost his life."

A hit-and-run driver struck and killed a security guard at the gate to a housing complex in Long Beach on Saturday, officials say.

The incident happened Saturday just after 3 p.m. Police say the driver of a 2012 Chevrolet Tahoe SUV was speeding nearby and lost control, slamming into and demolishing the guard shack at Century Villages at Cabrillo complex on San Gabriel Avenue.

Smith was inside. Paramedics tried to revive him but he was declared dead at the scene.

The driver of the SUV fled the scene on foot and has not been located. Police seized the vehicle, but have not publicly identified the suspected driver.

A small memorial with balloons and flowers have been placed at the site of the crash.

Anyone with information regarding the collision is asked to contact Detective Kelsey Myers or Detective Shawn Loughlin of the Long Beach Police Department Collision Investigation Detail at (562)570-7355.