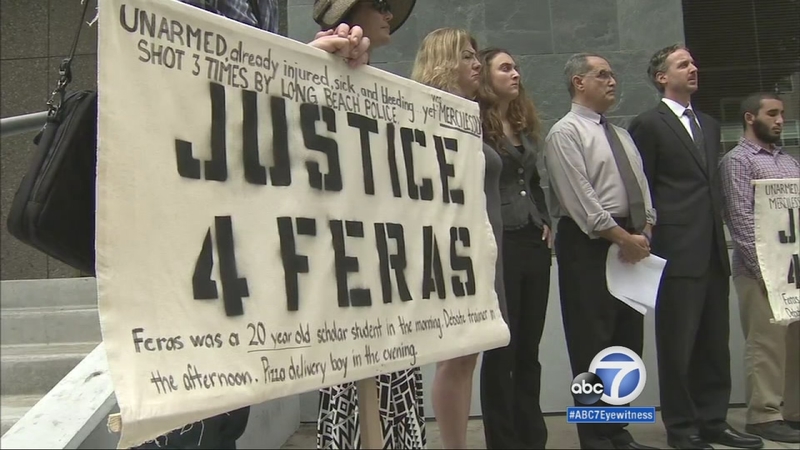 LONG BEACH, Calif. (KABC) -- Family members of a Long Beach college student fatally shot by police are striking back, filing a $28 million claim against the city and police department.

The family of 20-year-old Feras Morad said Wednesday that the claim puts them on a pathway to later file a lawsuit against the Long Beach Police Department. In that lawsuit, Morad's family members will demand $28 million.

"I still live in this nightmare when my daughter woke me up with her friends to tell me my son was dead," said Morad's mother, Amal Alkabra.

Morad was a student at California State University, Long Beach. Friends say he was an ROTC leader and a champion debater.

Supporters say he needed help on the day of that deadly encounter with Long Beach police. Instead, he was shot dead by an officer.

On May 27, Morad allegedly took hallucinogenic mushrooms. Witnesses told police he started behaving erratically and violently. They said he crashed through a glass window on the second floor of a building in the 4600 block of E. 15th Street.

Morad survived the fall, but according to police, he was still combative. Long Beach police said an officer issued verbal commands, then used a Taser and a flashlight. When Morad came at the officer, the officer fired five shots.

Morad's father, Amr Morad, said the officer should have waited for backup.

"My son was a proud American. He loved this country. It was too early for him to go. He didn't finish his job on this earth. He would have contributed a lot to this nation, and I was looking forward to it," he said.

The officer, a 12-year-old veteran of the force, has been assigned to desk duty until the investigation is completed.

The Long Beach Police Department said in a statement, "The police department thoroughly reviews all use of force incidents through a rigorous multi-step process that evaluates legal, policy, tactical and equipment issues."

Long Beach police did not have any comment about Morad's family's civil claim.