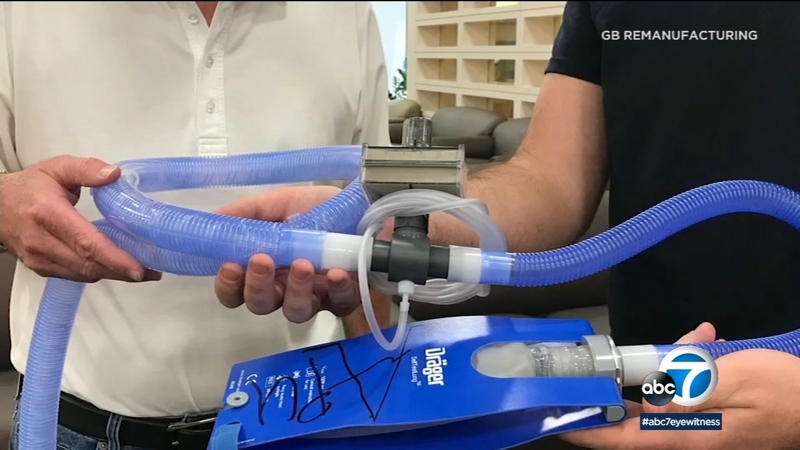 LONG BEACH, Calif. (KABC) -- It looks like a simple piece made of PVC, but it could save lives.

"This is one part that we could really use right now," described Michael Kitching, who is the president of GB Remanufacturing in Long Beach. The company normally works with fuel injectors, but it wanted to help during this coronavirus crisis. It reached out to Long Beach Memorial Hospital, which told the company it needed a unique part for a ventilator.

HELP FOR FIRST RESPONDERS: "These are the people who are out to protect us. So we felt like it was our duty to step up and help protect them."

"The manufacturer came up with a way to convert a normal respirator into one of these pressure controlled respirators," said Joe Evert, the director of engineering at GB Remanufacturing. "But it needed special fittings, and they did this under an Emergency Use Act, which meant that they didn't have all the pieces to do it but they allowed people to print the parts."

The company thought of 3D printing, but doing it that way, each part could take about 24 hours to manufacture and would be single-use only.

"When you are 3D printing it takes a long time because you're adding layers. So we wanted to be able to rapidly manufacture this so we went with CNC machining. It also brought the cost of the part down significantly," said engineer Zack Evert.

They started from scratch and designed the part so that it could be machined quickly. They were given to the hospital for testing and they worked, and they can be cleaned an re-used. The company made several dozen and donated them to the hospital to help the community.

"It was great. We delivered the parts a couple of days ago and a couple of people joined at the meeting and they're so thankful just to have these parts to be able to treat their patients," Kitching said.

The company hopes this is just the beginning. They want to work with other hospitals to make whatever parts they need to help the community.

A Monrovia company is manufacturing sneeze guards and donating them to local businesses to contribute to public health during the coronavirus pandemic.