In a civil lawsuit, deputies claim the Banditos controlled the East L.A. station "like inmates running a prison yard."
KABC
By Jovana Lara and Lisa Bartley 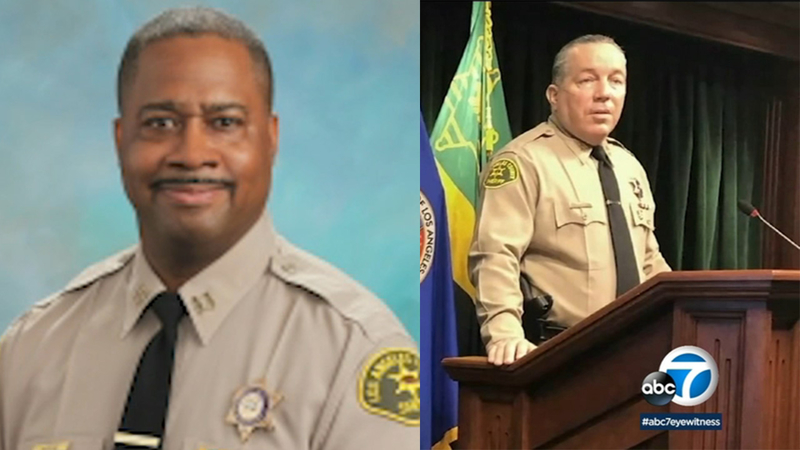 But now, then-Captain Matthew Burson says he was given orders on behalf of incoming Sheriff Alex Villanueva that his investigators should not ask questions about the Banditos or other station subcultures or cliques.

In a sworn declaration filed Tuesday, Burson said, "I assumed there was a valid reason for it and followed orders. I did not, at that time, suspect any ulterior motives, including a cover-up."

In a civil lawsuit, they claim the Banditos controlled the East L.A. station "like inmates running a prison yard."

"There's people getting stomped on... choked out," one of the victims told Eyewitness News in 2019. "It was just crazy ... Crazy to believe they're all cops."

LASD's Internal Criminal Investigations Bureau -- or ICIB -- launched a criminal investigation one day after the attack.

Initially, the lead investigator, Sgt. Jefferson Chow, wrote in his investigation log that he was instructed by Burson to question witnesses about the Bandito subculture aspects of the case.

But that all changed after Villanueva was elected in November 2018.

According to Chow's investigation log and Burson's declaration, Burson then called Chow two more times -- the first time after Jim McDonnell conceded the race to Villanueva and a second time four days after Villanueva was sworn into office.

Burson said the orders came from the top.

"On behalf of the Sheriff, Mr. Del Mese reiterated that ICIB was not to ask questions about the Banditos," Burson said of his second phone call with Villanueva's then-Chief of Staff Larry Del Mese, who has since retired.

Ultimately, the District Attorney's office declined in 2020 to file charges in the attack.

The district attorney's declination memo notes that the Banditos were not the focus of the LASD investigation and that 21 deputies identified as possible witnesses declined to be interviewed. Three of the four alleged Bandito deputies were fired. One of them retired.

Inspector General Max Huntsman told the Civilian Oversight Commission last month that by steering clear of the Banditos aspect of the case, LASD investigators ignored the alleged motive for the attack.

"I believe the manner in which this case was investigated and presented amounted to a cover-up, essentially obstruction of justice," Huntsman said.

Burson, who retired in March, ignored a subpoena to testify under oath at special hearings before the Civilian Oversight Commission this month.

"If he doesn't appear at the next hearing, we're going to ask that the court actually put him in ... incarcerate him until he's ready to testify," said Commissioner Robert Bonner.

When Villanueva took office, he almost immediately promoted Burson two ranks from captain to chief, but Burson said in his declaration that there was no "quid pro deal to cover up the deputy gangs in exchange for promotion to chief."

"There was absolutely no deal on this linking Banditos to my promotion," Burson wrote in his declaration. "I would not have participated in any cover-up if I knew there was a cover-up, and I certainly would not have done so in exchange for a promotion. I am not blindly loyal to anyone."

Burson and Del Mese did not return calls requesting comment by Eyewitness News.

In the summer of 2020, Villanueva put Burson in charge of leading an investigation into deputy gangs in the department.

"I am absolutely sickened by the mere allegation of any deputy hiding behind a badge to hurt anyone," Burson said at the time. "Vikings, Reapers, Regulators, Little Devils, Cowboys, 2000 and 3000 Boys, Jump Out Boys, and most recently the Banditos and Executioners have not only caused great embarrassment and concern to the department but to the community as well."
But now, Burson said that investigation never happened because he was told by the sheriff's office to hold off until after the RAND study on deputy gangs was completed.

"I do not think anyone from the sheriff's office ever told anybody including the Board of Supervisors or Max Huntsman that we were holding off until RAND completed its study," Burson wrote in his declaration.

Villanueva, for his part, has taken credit for a policy banning deputy cliques or subgroups, but at the same time insists that deputy gangs do not exist.

"I have yet to find one," Villanueva said in May last year. "In fact, if someone can find one or a gang member who wears tan and green, please let me know. They just don't exist."

In a statement late Tuesday, the LASD told Eyewitness News that they have provided "thousands of pages of documents in support of its investigation of these issues to a variety of agencies including the OIG and the COC."

The LASD statement did not address why or whether Villanueva gave those orders, but criticized the Civilian Oversight Commission as lacking legitimacy and took a swipe at retired Chief Burson.

"Mr. Burson was aware of these issues involving deputy gangs when he oversaw the investigation of deputy gangs. His statement or declaration now which contradicts his own words back in 2020 appears to be motivated by the pending litigation and potentially is politically motivated."