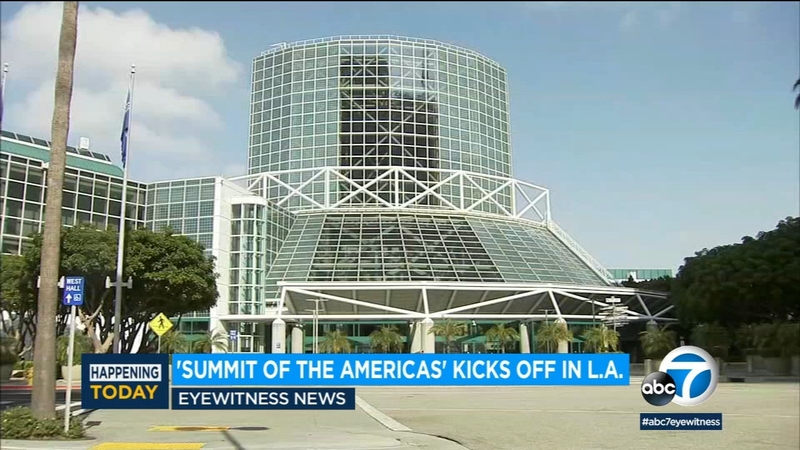 Delegates begin arriving for Summit of the Americas in LA

LOS ANGELES (CNS) -- The Summit of the Americas has officially opened Monday in Los Angeles, the first time a U.S. city has hosted the event since 1994 when the inaugural conference was in Miami, and representatives from the Western Hemisphere are starting to arrive.

The conference convenes once every three or four years and is expected to address issues including immigration, climate, and the COVID-19 pandemic.

Attendance of several countries is in doubt after the Biden administration declined to invite Cuba, Nicaragua and Venezuela to the conference. It led to Mexico's president announcing he was boycotting the Summit of the Americas on Monday.

President Joe Biden is expected to arrive for the Summit of the Americas in Los Angeles on Wednesday. Vice President Kamala Harris is scheduled to host a roundtable discussion with faith leaders on reproductive health care at the Los Angeles County Federation of Labor headquarters this afternoon.

Harris is set to participate in a tour of the Summit of the Americas Civil Society Forum Initiatives Fair at the Sheraton Grand Hotel in downtown Los Angeles later Monday afternoon, engaging with civic leaders from the Western Hemisphere focused on women's empowerment, democratic governance and women in government, her office said.

Los Angeles Mayor Eric Garcetti will join U.S. Ambassador to Mexico Kenneth Salazar, Consul General of Mexico in L.A. Ambassador Marcela Celorio and Councilwoman Nithya Raman for the installation of the Wings of Mexico at Griffith Park at 4 p.m. Monday.

The Los Angeles City Council began the process on Friday for seeking reimbursements for expenses incurred during the meeting of leaders of countries in North, South and Central America and the Caribbean.

The summit will be from Monday through June 10 with a focus on "Building a Sustainable, Resilient and Equitable Future'' in the Americas.

Delegates are expected to arrive Monday and Tuesday, with the main summit events beginning Wednesday. Some related forums will begin Tuesday.

The summit is organized by the White House and the U.S. Department of State. The Los Angeles Police Department estimated that it'll cost an additional $3.1 million per day to provide extra staffing during the event, totaling about $15.5 million for the five-day event.

According to Garcetti's office, traffic in and around downtown Los Angeles and LAX will likely be impacted from 10 p.m. Monday through noon Saturday. The summit will be based primarily at the Los Angeles Convention
Center.

"We're thrilled to host the Ninth Summit of the Americas in Los Angeles and to welcome leaders from across the Western Hemisphere here to focus on our shared goal to secure a sustainable, resilient and equitable future for all our peoples,'' Garcetti said. "The Summit will bring not only real benefits to our communities and local economy, but also result in temporary changes to traffic patterns in some parts of the city -- and we want to make sure that Angelenos are aware of, and prepared for, these impacts on our streets, highways and freeways.''

The mayor's office encouraged people to avoid the areas between the Santa Monica (10) an the Hollywood (101) freeways west of the Harbor (110) Freeway, whenever possible.

From Monday at 10 p.m. through Saturday, commuters should avoid:

People can use the following freeway exits to access downtown between Monday and Saturday:

Garcetti's office encouraged people departing LAX to allow additional time to get to the airport, particularly on Monday, Tuesday and Friday.

According to the U.S. State Department, the meeting promotes regional cooperation and helps address the region's most pressing issues, including increasing economic competitiveness, enhancing access to technology, countering trafficking and promoting democracy and human rights throughout the Americas.

During the most recent summit -- which was in Peru in 2018 -- the region's leaders committed to fighting corruption, according to the U.S. State Department.