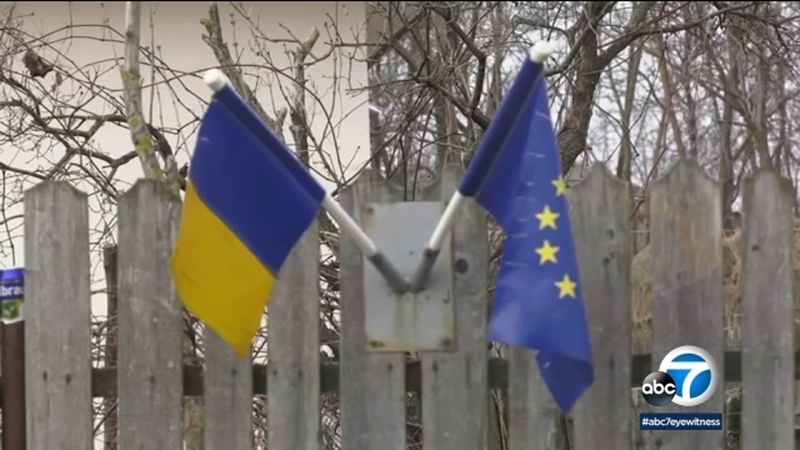 LOS ANGELES (KABC) -- A Ukrainian American woman living in Southern California and her nephew in Kyiv, shared their powerful story, and Eyewitness News reached out to them Monday to see how they're coping with Russian forces closing in on the capital.

On Monday, the UN's High Commissioner for Human Rights, Michelle Bachelet said her office recorded 102 civilian deaths, including children and hundreds of injuries, warning the real figure is feared to be "considerably higher."

"I am so devastated for what's happening to the people in Ukraine," said Mostovaya Hyder.

Ukraine has fought back, preventing Russian forces from seizing major cities, but the war goes on and intensifies. Savva Mostovoy, 22, is in Kyiv.

"You just can't predict the place that will be attacked," Mostovoy said. "Almost everywhere, everywhere, not almost, everywhere, we can pass away every second."
Mostovoy is a student who also restores art at the National Museum of the History of Ukraine. He expressed immense gratitude for Ukrainian soldiers and the need for continued support.

"They are fight for us, for our future, for our lives for our children, for our families, for our dreams," he said.

Russian forces shelled Ukraine's second-largest city on Monday, rocking a residential neighborhood, and closed in on the capital, Kyiv. Jim Dolan has the latest details.

Since Eyewitness News first spoke with the nephew and aunt Thursday, there has been mounting social and political support for Ukraine, including an unprecedented move by the European Union.
"For the first time ever, the European Union will finance the purchase and delivery of weapons and other equipment to a country that is under attack. This is a watershed moment," said European Commission President, Ursula Von Der Leyen.

Mostovaya Hyder is in Los Angeles, closely watching the response from around the world.

"The world uniting to all stand against evil, and against something that is so senseless," she said. "It's nice to see. It feels like the Ukrainian people are being very supported in that sense."

She is urging for more support, as her sister and nephew remain in Kyiv.