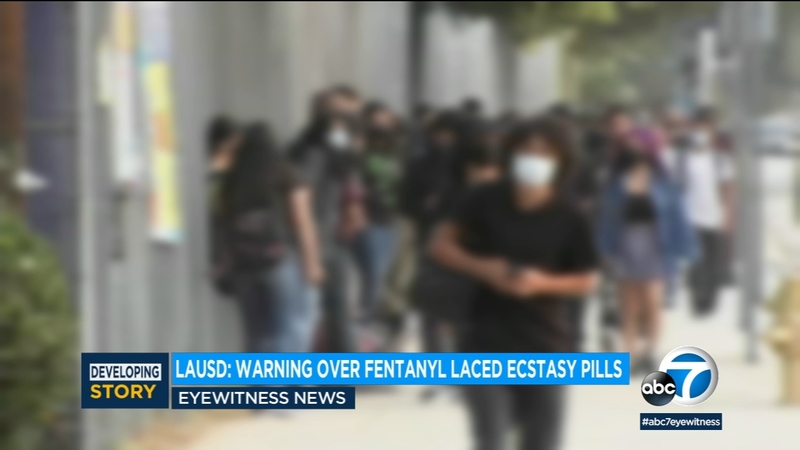 LOS ANGELES (KABC) -- The Los Angeles Unified School District is issuing a strong warning about drug use after three girls from the Santa Monica area ingested ecstasy pills that were likely laced with fentanyl.

While there's no direct connection to the LAUSD, the district on Wednesday sent an alert to parents warning of the risks, saying the adolescents involved "suffered neurological consequences."

"The pills were purchased online and raise significant concern for the growing trend of contaminated illicit drugs and overdoses in Los Angeles County," read the letter.

Details surrounding the age of the three adolescents involved were not immediately released.

Illicit drugs & counterfeit pills contaminated with fentanyl, methamphetamine, & other substances are circulating in our communities & overdose-related deaths continue to rise at an alarming rate. Be cautious & take steps to prevent an overdose. https://t.co/RBaaQUXpTp
(1/2) pic.twitter.com/nzJ3Jry47k

The district added the county public health department released an alert, stating there is a "strong likelihood" these drugs are being administered across the city of L.A.

"We encourage you to have discussions with your child about making healthy choices and about the dangers of ingesting any illicit drugs especially as we enter into end-of-year celebrations and the summer," said the district.

In Riverside, a school employee and her husband are facing criminal charges for allegedly distributing fentanyl to at least eight students at a school for students with special needs, according to police.
Melissa Harloam-Garrison, 46, was arrested last week on suspicion of providing the drug to students at Bright Futures Academy, a non-public school serving kindergarten to 12th grade students.

Riverside police said their investigation started last Tuesday after they were called to the school to deal with an incorrigible student.

"This is the type of school that has kids with special needs and cognitive and behavioral struggles, so it's not necessarily uncommon for us to respond like that," said Riverside Police Officer Ryan Railsback.

A Riverside school employee and her husband face criminal charges for allegedly distributing fentanyl to at least eight students at a school for students with special needs, police say.