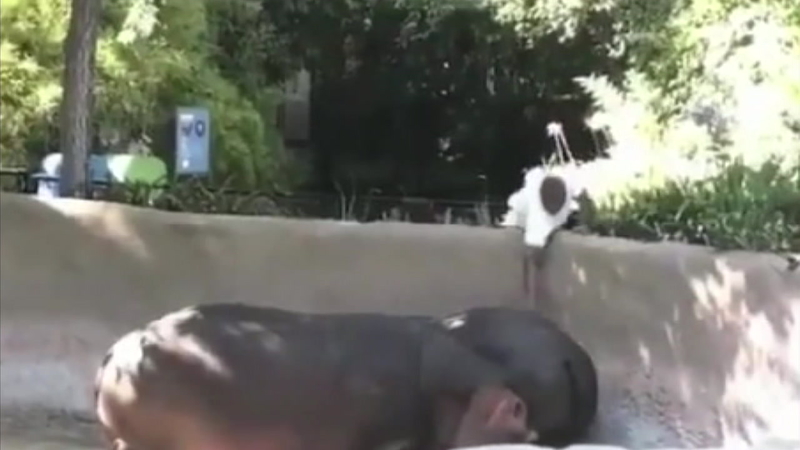 LOS ANGELES (KABC) -- The L.A. Zoo may host a wide array of animals, but one of the most dangerous ones may be human.

A man was caught on video scaling a short fence, then reaching over a barrier to spank a juvenile hippo. After a small celebration for the camera, the man takes off back to the zoo.

Martine Colette is the director of the Wildlife Waystation in Lake View Terrace. She said the man may not have realized that in their native Africa, hippos are considered one of the deadliest animals around.

"Very dangerous thing to do," she said. "More people are killed by hippos in Africa, probably by anything else."

Zoo officials said the hippo was unharmed, and they only learned of the spanking when the man posted the video on his social media page.

But his incident comes as other wildlife intrusions sparked public outcry and police investigations.

One man was captured on video and faces possible charges after wading out into a river in Alaska in an attempt to take a picture of grizzly bears feeding on fish. What the man didn't know is that he was standing right in front of a camera livestreaming video to the web.

And another video captured a man taunting a bison at Yellowstone National Park in July. After nearly being gored, the man returned to his vehicle. He was later arrested for harassing wildlife.

"If you want to enjoy wildlife, you've got to do it on mutual terms. You watch and observe and they delight you with who they are," she said.

The problem, Colette said, is that when wildlife encounters go bad, it's not just the people who suffer. Case in point - Harambe the gorilla, who was shot and killed two years ago when a child fell into his enclosure.

"An endangered species had to be destroyed. Did anything happen to the human? It is always the animal that pays the ultimate price. The animal always dies," she said.