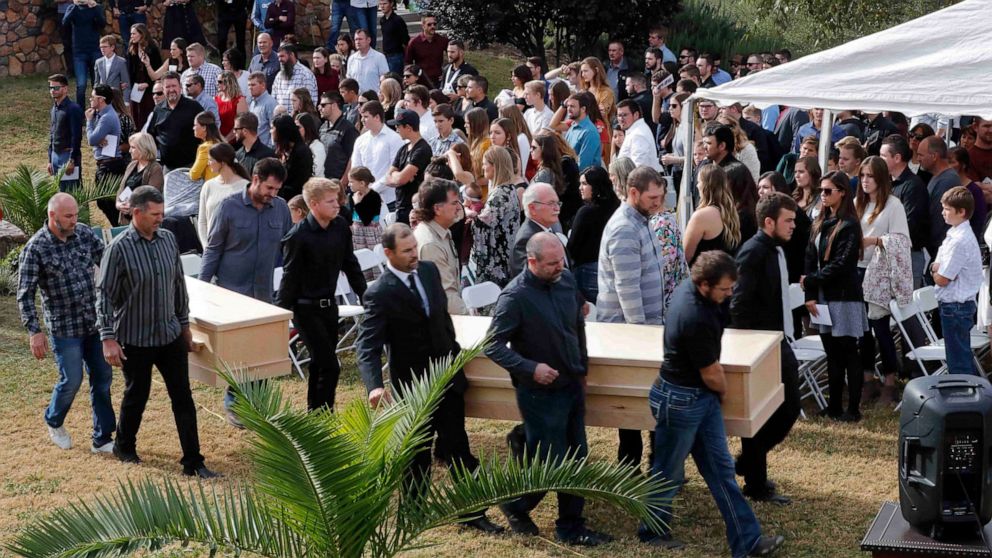 ABCNews
By MORGAN WINSOR
Dozens of mourners have arrived in a remote area of northern Mexico ahead of the funerals for nine American family members who were killed in an ambush earlier this week.

Convoys of vehicles carrying relatives and friends, some traveling from the United States, have been rolling into the town of Bavispe in the Mexican border state of Sonora since Monday's attack. Mexican soldiers, who are now keeping watch over the area, were seen escorting visitors' cars ahead of the funeral services, which are expected to begin Thursday.

The slain family members were U.S. citizens but lived in Bavispe in a small Mormon community called "La Mora," which lies in a desert valley surrounded by the mountains of northeastern Sonora, near the state limits with Chihuahua. A relative, Leah Staddon, who was born and raised in the same close-knit community but now resides in Arizona, said her family has lived in Mexico for decades and they are all dual citizens.

At the funeral for Dawna Ray Langford and her two sons, 11-year-old Trevor Langford and 2-year-old Rogan Langford, one of the pallbearers was Devin Langford, 13, who walked over a dozen miles to seek help after hiding his injured siblings in bushes.

During the service, one of Dawna Langford's older sons, Ryan Langford, said, "My mother gave her life for her children."

On Monday morning, the group of family members left their homes in the mountain hamlet to drive to a wedding in Chihuahua state, according to Staddon.

They were traveling in a caravan of three vehicles between Sonora and Chihuahua states when they were ambushed by an armed group that day. Three women and six children, some as young as 8 months, were gunned down, according to Mexico's security minister, Alfonso Durazo.

Eight other children survived the massacre, though many were injured.

Approximately 200 shell casings of .223- and 77 mm-caliber guns were found at the scenes, Cordova said.

The woman whose wedding the family was heading to, Kendra Miller, told ABC News that she and her husband have received criticism from "sick people" who claim they were in part responsible for the massacre.

"This is breaking us and we have no culpability whatsoever in any of what happened in that attack," said Kendra Miller, who is the sister-in-law of one of the victims, Rhonita Miller.

Kendra Miller said understands that the naysayers are angry and are "sick of seeing these things happen," but said it still "hurts to hear those things."

"It hurts being here with my family and going through all of this," she added.

The region where the attack took place -- less than 100 miles from the Arizona border -- is of territorial dispute by several criminal groups, and Mexican authorities have said it's possible the family's vehicles were mistaken for those of a rival group.

Speaking at a press conference Wednesday, Mexican Army Gen. Homero Mendoza said a criminal group called "La Linea" is believed to be responsible for the attack. La Linea has strong control in Chihuahua state and has been battling with elements from another criminal group called "Los Salazar," which is aligned with the Sinaloa Cartel. The latter group has more control in Sonora state, according to Mendoza.

Mendoza said the two groups had been battling on the day of the ambush, and La Linea had sent a criminal cell between the towns of Janos and Bavispe, along the border between the two states, to avoid or limit an incursion by Los Salazar onto their turf in Chihuahua.

But some relatives have taken issue with the notion that the family got caught in the crossfire between the two groups.

Julian LeBaron, a relative who lives in Chihuahua state, said he believes the attack was intentional and that the Mexican government has "manipulated" the facts.

"The federal government came out and said they were caught in the crossfire and there was no crossfire," LeBaron told ABC News in an interview Wednesday. "They intentionally aimed and fired on women and children."

David Langford, whose wife Dawna Ray Langford died in the ambush, said he believes his family was "targeted" by Mexican drug cartel "sicarios" -- or hit men.

"This was a targeted attack and the cartel knew there were women and children in those vehicles," David Langford told ABC News in an interview Wednesday. "The cartel waged violence against our community using our families as pawns. My wife was shot and killed."

David Langford said five of his seven children who survived the attack have been transferred to a hospital in Tuscon, Arizona, for treatment. Two of them were still in critical condition Wednesday night, he said.

"We have been in this community for more than 40 years. Our community has nothing to do with the drugs and violence," he told ABC News. "This is horrific, and I am very concerned that we can't live there anymore. My family has been destroyed."

The father broke down in tears when talking about his 13-year-old son, Devin Blake Langford, who was unharmed in the attack and hid his wounded brothers and sisters in the bushes after, covering them with branches, then walked about 14 miles back home to get help.

A spokesperson for the U.S. Department of State called the attack a "horrific act of violence."

"We are closely monitoring local Mexican authorities' investigation, and as President Trump and Secretary [of State Mike] Pompeo have stated, we offer to support this investigation," the spokesperson said, adding that Trump spoke to Mexican President Andres Manuel Lopez Obrador on Tuesday, and the two leaders agreed that their countries will "cooperate closely to ensure the perpetrators face justice."

"The Department of State has no higher priority than the safety and welfare of U.S. citizens abroad," the spokesperson said. "When a U.S. citizen is missing or passes away overseas, we engage with local officials at multiple levels and provide all appropriate consular assistance."

The FBI said it is in contact with Mexican law enforcement and has "offered assistance and stand ready to assist in the wake of this tragedy."