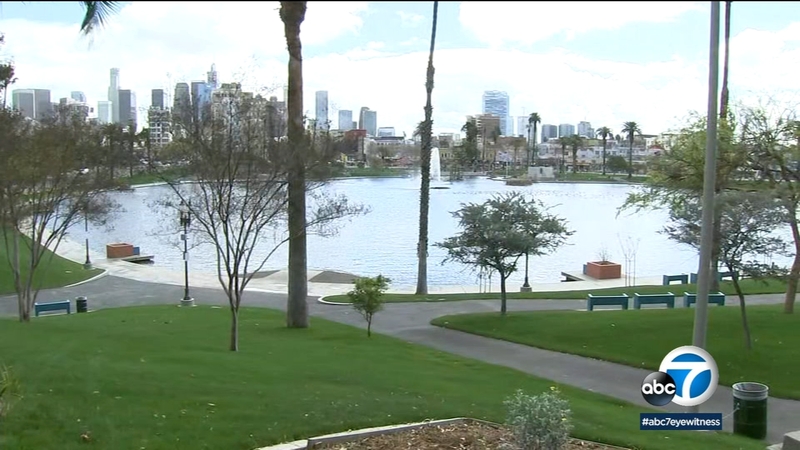 MacArthur Park section reopens after months of closure for maintenance

WESTLAKE, LOS ANGELES (CNS) -- A section of MacArthur Park reopened to the public Tuesday, Feb. 22, after being closed for more than four months for a $1.5 million improvement project with landscape and general park upgrades.

The park's lakeside portion was closed on Oct. 15. In October, Councilman Gil Cedillo said the park would be closed about 10 weeks. In January, his office attributed the delay to workforce impacts, supply chain disruptions and heavy rainfall in December.

"I am proud to reopen MacArthur Park Lakeside to make it clean, safe, and secure," Cedillo said in a statement. "We made extensive landscape and general park improvements including but not limited to 133 trimmed trees, planting 60 new trees, 125 new plants, and shrubs, and 276,000 square feet of sod, a new irrigation system with 556 sprinklers and 18,000 feet of linear pipe, new lighting featuring 26 upgraded LED lights, 75,000 square feet of new asphalt walkways and repaved and striped parking lot, and new painted floors games, park benches, and planters."

Programming from the Department of Recreation and Parks will continue, as well as that of nonprofit partners including El Centro Del Pueblo, Volunteers of America and Korean Youth + Community Center.

Homeless people will be cleared out of a section of MacArthur Park, one of the oldest L.A. parks. City leaders say it's necessary to clean up the park, but homeless advocates are concerned over the plan.

On Jan. 12, MacArthur Park was included in a number of locations selected for enforcement of the city's anti-camping law to prohibit tents, sleeping and blocking of the public right-of-way.

The resolution introduced by Cedillo and approved by the City Council included both sides of the park: MacArthur Park Lake, at Wilshire Boulevard between Alvarado and Park View streets and the MacArthur Park Recreation Center at 2230 W. Sixth St.
Cedillo said the decision was made with people's health, safety and welfare, particularly that of children and youth, as the top priority.

The Los Angeles City Council voted to enforce its anti-camping law at 58 new locations, including MacArthur Park, with two council members voting against the resolutions.

Following the park's reopening Tuesday, outreach teams from the Los Angeles Homeless Service Authority and People Assisting The Homeless will engage with people living in both sides of the park to offer services, according to Cedilllo's office. Peace Ambassadors through Volunteers of America will be onsite to maintain peace in the park.''

Unarmed uniformed security officers provided by the parks department will be onsite during the late afternoon to early morning, and park rangers and Los Angeles Police Department officers will be patrolling, according to Cedillo's office.