Voting by mail? Here's how to make sure your mail-in ballot is counted

Want your mail-in ballot to be counted? Send your ballot as soon as you can, sign it and make sure your signature matches the one on file.
KABC
By Carlos Granda and Grace Manthey 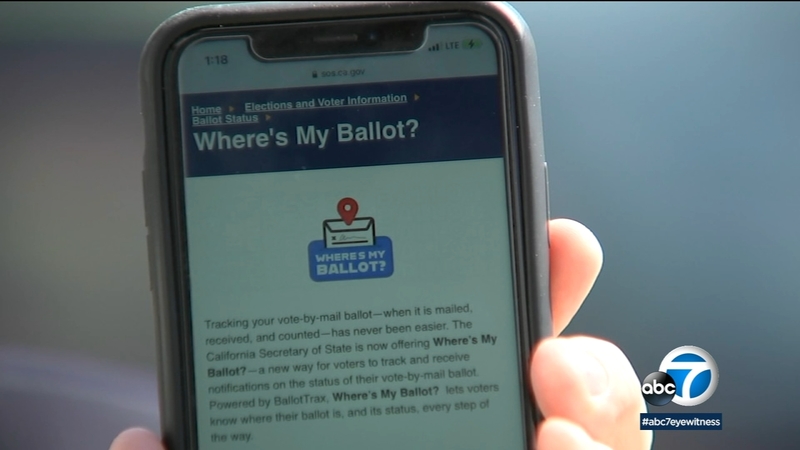 Here's how to make sure your mail-in ballot is counted

LOS ANGELES (KABC) -- Want your mail-in ballot to be counted? Send your ballot as soon as you can, sign it and make sure your signature matches the one on file.

The COVID-19 pandemic brings uncertainty when it comes to voting in person. And all registered voters in California will, or have already received, a vote-by-mail ballot.

"This country has seen this kind of amplified noise about mail-in ballots," said Registrar of Voters for Orange County Neal Kelley. "But the reality is that a mail-in ballot in my opinion is a very secure way to cast your ballot."

But how do you make sure it's not rejected?

In 2016, less than 1% of the more than 3 million returned mail-in ballots were rejected in Southern California, according to an ABC7 analysis of the Election Administration and Voting Survey. That's a small percentage but still more than 26,000 ballots.

The Southern California county with the highest percentage of rejected mail-in ballots in both years was Riverside County, at more than 1% in 2016 and more than 2% in 2018.

The nationwide trend is similar to the Southern California trend: less than 1% rejected in 2016 and slightly more than 1% in 2018. Some areas are much worse.

Queens, Kings and New York counties in New York City each rejected at least a quarter of the mailed ballots they received in 2018. Several suburban counties surrounding Philadelphia rejected between 5 and 10% of voters' mailed ballots.

For both years in Southern California, missing the deadline, not having a signature or having a non-matching signature were the ways most ballots were rejected where officials reported a reason.

In 2016, 19% of rejected mail-in ballots with a listed specific rejection reason missed the deadline, 30% didn't have a signature and 48% had a non-matching signature.

Then in 2018, 44% of rejected mail-in ballots with a listed specific rejection reason missed the deadline, 18% didn't have a signature and 32% had a non-matching signature.

According to election officials, checking signatures is a rigorous process.

"That first goes through a software comparison for the signature and it's important for people to note that that system does not reject any ballots. It's just a confidence level of the verification of signature," said L.A. County Registrar-Recorder Dean Logan.

"If the confidence level is not at our threshold then it goes to a manual check where we have employees check the signatures against the signature on record," he said.

If the person checking the signature has questions, they then reach out to the voter to verify the vote and make it count.

So far, there have been some mail-in ballot issues. Ballots distributed in Woodland Hills contained printing errors and 2,100 voters didn't have the boxes to vote for president.

Officials said while it's being corrected, it's a reminder to check your ballots and send them in as early as possible. You can also drop them off through drop boxes.