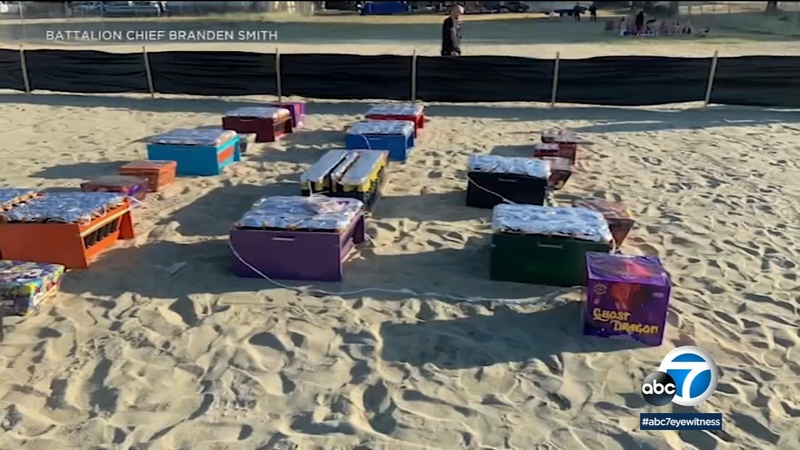 LAKE ELSINORE, Calif. (KABC) -- A Lake Elsinore man was arrested Sunday after authorities say he set up a large number of dangerous fireworks in his backyard for a makeshift fireworks show.

Howard "Steve" Lawrence was booked into the Cois Byrd Detention Center in Murrieta and is facing one felony count of possession of dangerous fireworks, according to Cal Fire Battalion Chief Branden Smith.

Cal Fire says the agency received a tip about the "large quantity" of fireworks in the 32000 block of Garner Road in the Lakeland Village community.

When Cal Fire officers arrived at the home, they "discovered a makeshift public display of fireworks that were fused together and prepared for an unlawful discharge assembly."

A sheriff's bomb/hazardous device team dismantled the display and rendered the fireworks safe for transport and disposal, Smith said.

"It's not ever been a secret, what I've been doing over here. It's been very publicized. I don't know why this year they have decided to basically do what they did," Lawrence told Eyewitness News.

He says he's hosted a fireworks show every Fourth of July for the past decade. He says it was all set up well away from any dry brush and he even set up silt screens to prevent anything from accidentally shooting off toward residents.

"There (are) no accidents that have ever happened in 11 years and we have hundreds of people that try to make their way out here and they appreciate it," Lawrence added.

Cal Fire law enforcement says they will be seeking additional charges and they have a zero tolerance policy for illegal fireworks.

Still, many of Lawrence's neighbors are furious at the fact that he was arrested and hauled away in handcuffs. Some are collecting donations for his defense.

"The police department have sat out in front and watched themselves, for years. So why this year?" said Nick Riney of Lake Elsinore.

Lawrence was released on $10,000 bail, but at this point, the District Attorney's office has yet to decide whether to file charges.