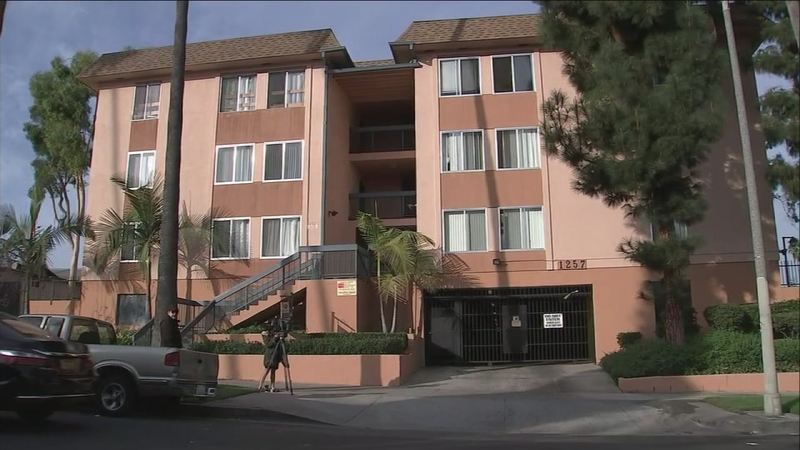 MID-CITY, LOS ANGELES (KABC) -- Police are on the hunt for a suspect or suspects after a man was gunned down in Mid-City early Monday.

Los Angeles police responded to a call of shots fired outside of an apartment building in the 1200 block of Manhattan Place at about 12:15 a.m. When officers arrived, they discovered a man on the sidewalk with several gunshot wounds to the chest.

The victim, identified only as a man in his 20s, was pronounced dead at the scene.

People who lived in the apartment building said they knew the victim, but not very well.

"He had a girlfriend," Kerrilyn Martinez told Eyewitness News. "There are rumors they argue a lot and that's it really."

Investigators found several casings at the scene and, according to a preliminary investigation, there was no indication the shooting was gang-related, authorities said.

No suspect description was immediately available, but investigators said a suspect may have fled the crime scene in a white vehicle.

Detectives are looking into surveillance footage and investigating whether there were any witnesses.

"The key to solving all these cases is community involvement," said Lt. John John Radtke of the LAPD. "This is an urban area. We have many cars that are traveling through the area. Someone saw something, so if you did, please call us and give us that information."
Report a correction or typo
Related topics:
mid citylos angeleslos angeles countyshootingman killedman shot
Copyright © 2021 KABC-TV. All Rights Reserved.
TOP STORIES
LAUSD to require COVID-19 testing for all students, staff
Video: Fight breaks out on 60 Freeway in Ontario after crash
Scarlett Johansson sues Disney over 'Black Widow' release
New fair opens at Santa Anita Park, offering games, rides
Police: Gun, victim's wallet found in theater shooting suspect's home
Good Samaritans smash window to save driver having medical emergency
Jaxson Hayes arrested after altercation with LAPD in Woodland Hills
Show More
2 killed, 1 hurt after car slams into tree off Angeles Crest Highway
Federal workers required to get vaccinated; military may be next
Las Vegas to mask up indoors again after Nevada adopts COVID-19 rule
Alert system to aid farmworkers working in dangerous conditions
20-year-old charged in killing of Rite Aid clerk in Glassell Park
More TOP STORIES News