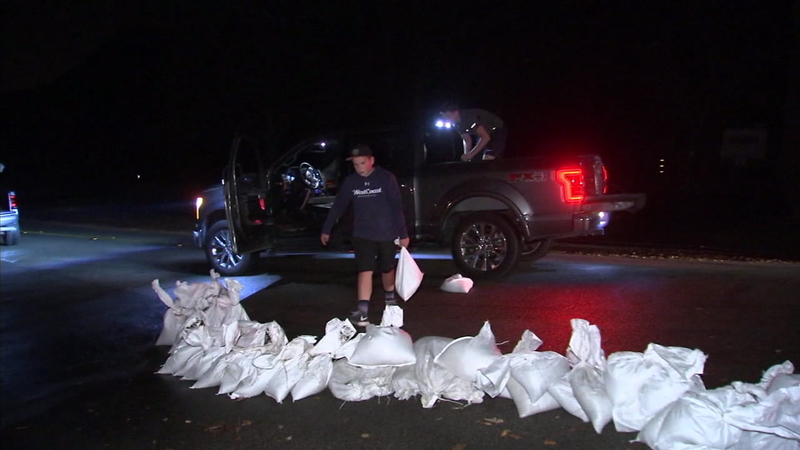 AGOURA HILLS, Calif. (KABC) -- Residents living in the burn areas impacted by the Woolsey Fire and the Holy Fire are being urged to prepare for possible mudslides and debris flow with rain in the forecast starting Wednesday.

Mandatory evacuation orders have been issued as of 3 p.m. Wednesday for the following areas of the Holy Fire burn area in the Lake Elsinore community: Amorose, Alberhill, Glen Ivy A, Glen Eden, Grace, Horsethief A, Laguna A, Matri, McVicker A, Rice, Withrow A

Anyone living in those areas was advised to leave immediately.

Mandatory evacuations ordered as of 3 p.m. in the Holy Fire area for Amorose, Alberhill, Glen Ivy A, Glen Eden, Grace, Horsethief A, Laguna A, Matri, McVicker A, Rice, Withrow A. People in these zones MUST GO NOW. Check https://t.co/q5Eos4UKT2 for evacuation zone details.

The National Weather Service expects rain to start hitting Wednesday evening along with gusty winds into Thursday. As much as 1/2 to 2 inches of rain is expected.

Locals have begun stacking sandbags and taking other steps to protect their properties. Malibu, Agoura Hills, Thousand Oaks and other places where the Woolsey Fire left hillsides exposed and vulnerable to mudslides could be at risk again.

By Wednesday night, sandbags piled along properties there. Members of a local church piled sandbags in front of the Seminole Springs Mobilehome Park.

"I live in the first house right here, and I'm pretty concerned about the mud coming down," said resident Houston Waye.

Just down Mulholland Highway, Mark Sand moved hundreds of sandbags. He runs the Hearts and Horses Therapeutic Riding Center and said he expects to have a sleepless night.

"I stayed here during the fires, I'll stay during the floods," Sand said. "I have 10 horses down there...I'm committed."

Authorities are warning residents to prepare for possible evacuations and plan ahead for road hazards, flooding and outages ahead of the rain.
showing

The Woolsey Fire started Nov. 8 in Simi Valley near the Rocketdyne facility in the Santa Susana Pass. It quickly triggered evacuations in Ventura and Los Angeles counties.

The fire destroyed more than 1,600 structures; three people died in the blaze. The cause of the Woolsey Fire remains under investigation.
EMBED More News Videos

With rain approaching, mandatory evacuation orders have been issued for communities in Lake Elsinore affected by the Holy Fire.

The storm is also raising concerns for people living near the Holy Fire burn area.

In Lake Elsinore, which endured the large Holy Fire in August, preparations were made to shore up a 60-year-old dam that sits directly above homes. It could be the last line of defense for properties, but if the rain becomes too intense it may not be enough.

The following areas were affected: Amorose, Alberhill, Glen Ivy A, Glen Eden, Grace, Horsethief A, Laguna A, Matru, McVicker A, Rice and Withrow A zones.

Flood control officials said their main concern comes when a portion of the storm moves into the area Thursday.

Residents living in the Cranston Fire burn area in Idyllwild were also warned about avoiding areas susceptible to debris flow.

Download the ABC7 app for weather alerts: Click here for for iOS devices | click here for Android devices. If you have the app, turn on push notifications and personalize the app. Click on My News from the bottom menu, then star the topics you'd like to follow and tap Done.
Report a correction or typo
Related topics:
agoura hillsthousand oakslos angeles countyventura countymalibuevacuationmudslidewoolsey fire
Copyright © 2021 KABC-TV. All Rights Reserved.
More Videos
From CNN Newsource affiliates
TOP STORIES