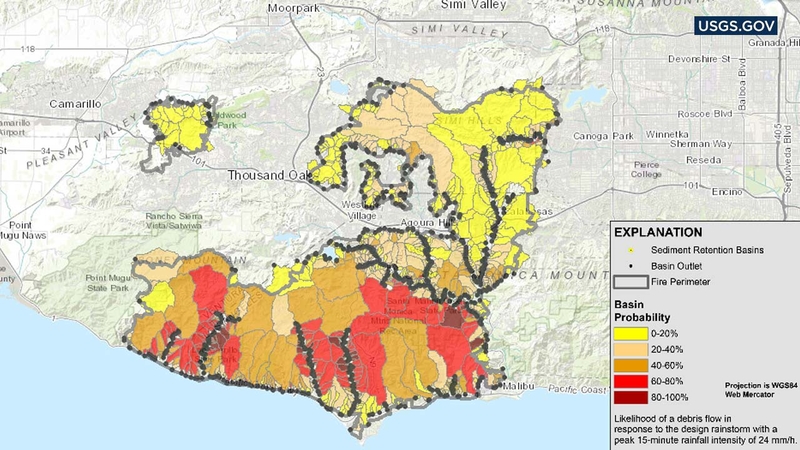 The map encompasses parts of Ventura and Los Angeles counties impacted by the Woolsey Fire.

The map consists of multiple layers, which display the likelihood of debris flow, potential volume of debris flow and combined relative debris flow hazard. The USGS said the estimates were based on a storm with a peak 15-minute rainfall intensity of 24 millimeters per hour.

Spots beneath the burned out hillsides are most likely to see debris flows.

The L.A. County Fire Department and sheriff's department have staffed additional resources throughout the areas impacted by the Woolsey Fire based on the anticipated rain that is forecasted for the night. A swift-water rescue team is one of many emergency crews on alert.

"With this rain coming in, we have a lot of steep hillsides, rocks that came down the hills a few days ago when we had a little bit of rain. We don't know what's going to happen today, but we want everybody to be prepared," said L.A. County Fire Department Capt. Brian Jordan.

Along with the potential for mudslides, the rain may bring the possibility of power outages and evacuations.

Free sandbags and sand are available in several spots throughout Malibu, Thousand Oaks and other areas, though you may have to do the shoveling and heavy lifting yourself. Some areas are even beginning to run low on sand.

Fire Station 89 in Agoura Hills is packed with residents filling up sandbags to prepare their Woolsey Fire-ravaged neighborhoods from rain on Wednesday.

"I'm trying to, you know, strategically place them so that the runoff goes off into the street instead of into our house or into the pool...so that's kind of the strategy," said Agoura Hills resident Bridget Van Gelder.

The city of Malibu is encouraging residents to prepare but warning not to remove any fire debris, which could contain hazardous materials.

Meanwhile in the Inland Empire, evacuation orders have already been issued for the Holy Fire burn areas - including parts of Lake Elsinore, Corona and Glen Eden.

Residents in the Holy Fire burn area are preparing for the incoming storm, and those who live in neighborhoods right up against the charred hillsides are especially concerned they could give way and cause significant damage.

A threat of possible flooding and mudflow is not what Homer Sanchez, a father to a newborn, wants to hear right now. He placed sandbags around his property in Corona to protect his home.

It's been a stressful year for Sanchez. This summer, the Holy Fire destroyed more than a dozen structures in Riverside and Orange counties. Sanchez's house of nine years was threatened - with a toddler at home and a baby on the way

"Especially for the fire when she was pregnant, it was real stressful for her and me. We didn't know if we were going to come back to our house or not," Sanchez said.

He's not alone in the stress that comes with living in fire and mudslide-prone areas.

"When you go down the street, I see people selling their houses already, and I hear mixed reviews about the fire, the flood warnings, so they don't want but me, we love it here. I love it, I love the neighborhood," he said.

Sanchez and his family are taking it in stride. They're doing their part to be proactive, an d they're ready to go.

#LARain is on the way, which means #WoolseyFire burn areas are vulnerable to mud and debris flows. Before the fires, before the floods, before you need help, sign up for emergency alerts: https://t.co/14nXko6rOA. @ReadyLACounty pic.twitter.com/ja7iUIhh7S

Download the ABC7 app for weather alerts: Click here for for iOS devices | click here for Android devices. If you have the app, turn on push notifications and personalize the app. Click on My News from the bottom menu, then star the topics you'd like to follow and tap Done.
Report a correction or typo
Related topics:
agoura hillsthousand oakslos angeles countyventura countymalibusafetyevacuationstormrainmudslidewoolsey fire
Copyright © 2021 KABC-TV. All Rights Reserved.
RELATED 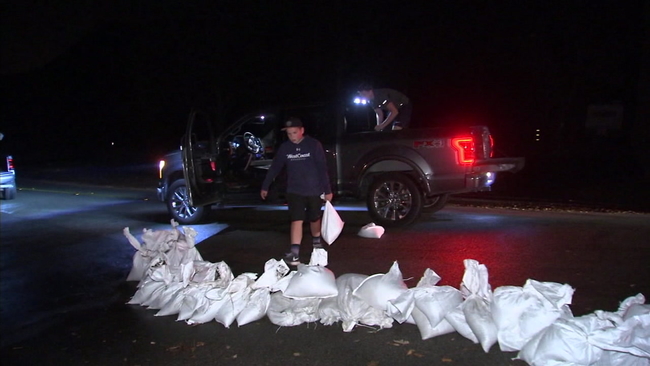