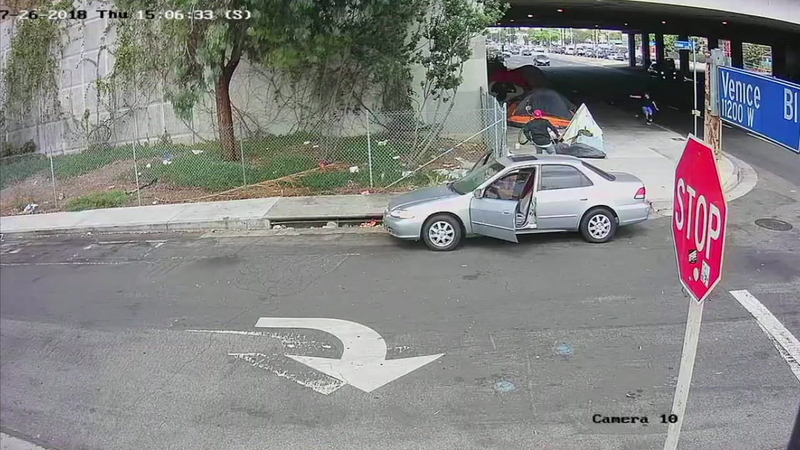 MAR VISTA, LOS ANGELES (KABC) -- A shooting at a homeless encampment in Mar Vista was caught on camera, and now fed up neighbors are demanding action to make their streets safe.

In the video, a silver Honda Accord pulled up to a homeless encampment around 3 p.m. and the driver got out to look for someone near one of the tents. He then pulled out a gun and fired multiple rounds, hitting a man with help from his passenger.

Los Angeles police said they got away and are now wanted for attempted murder.

"Anybody could be walking by or driving by and get caught in the crossfire. It's frightening," Nanette Pastor-Hanna said.

Nanette and Elliot Hanna live near the 405 Freeway and Venice Boulevard, where last Thursday's shooting happened. They said the homeless encampment is impacting their quality of life.

Esther Garcia has cut hair at the salon next to the encampment for 21 years. She said drugs are a huge problem for the people who live and hangout under the freeway. She often sees needles on the sidewalk.

"The city has to do something, really, because it's very bad for all the community here. It doesn't look good and our customers pretty much, they tell us when they come they don't know where to park their car because they're afraid," she said.

Los Angeles police and Councilman Mike Bonin said they aren't sure whether the victim in the shooting lives at the encampment in Bonin's district or is even homeless. Since February, the city has engaged in outreach at the encampment more than 30 times.

The Hannas said the LAPD and City Council aren't doing enough. Other people who live and work in the area said the outreach hasn't eliminated the encampment and it continues to be a haven for drugs and violence.

"We called, for example, the offices of Mike Bonin several times, but all we're getting is a meeting, which I don't understand. What is it that he wants us to tell him that he doesn't see outside?" George Frem said.

Bonin released a statement regarding the encampment to Eyewitness News.

"Last week, two assailants drove by a homeless encampment, stopped, got out, and fired at someone in or near the encampment. I'm eager for the results of LAPD's investigation and hope they apprehend the suspect and determine the motive.

"No one should live in fear-whether it's neighbors who live in a home or people forced to live on the street. I'll continue to fight for more LAPD patrol resources for the area, so everyone can stay safe from criminal activity. And I'll continue to fight for solutions to homelessness, like bridge housing, so that no one has to live on the street."
Report a correction or typo
Related topics:
mar vistalos angeleslos angeles countysafetyhomelessshootingi 405surveillance video
Copyright © 2021 KABC-TV. All Rights Reserved.
TOP STORIES
How do new CDC guidelines affect SoCal?
CDC reverses course on indoor masks in some parts of US
1 killed, 1 wounded in shooting at Corona movie theater
Ed Buck found guilty in West Hollywood meth overdose case
Walmart will cover 100% of college tuition for its workers
CSU to require all students, staff to get COVID-19 vaccine
Arrest made in fatal shooting of Rite Aid clerk in Glassell Park
Show More
Tenants of Caltrans-owned homes in El Sereno upset with SB51
OC congresswoman introduces Kobe Bryant Day resolution
Bay Area teen attacked by crocodile while vacationing in Mexico
Video: Dog thrown from truck in West Hills crash
OC restaurant requires customers to prove they are not vaccinated
More TOP STORIES News