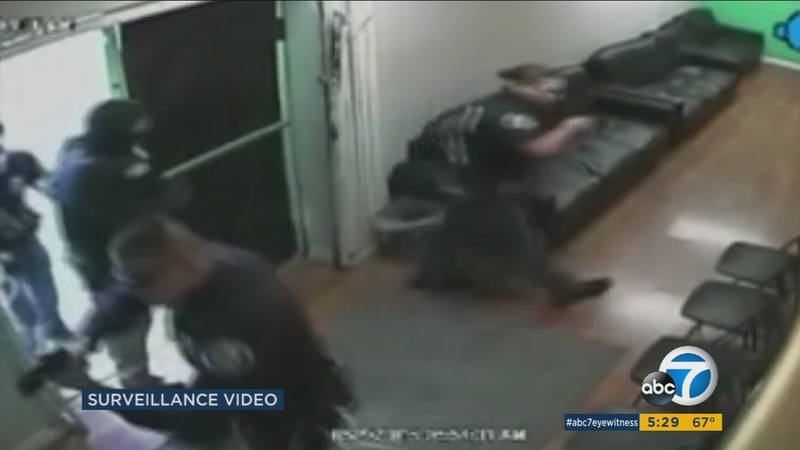 One of the officers was also charged with vandalism for allegedly smashing five surveillance cameras and lenses, each valued between $80 and $100, during the raid at Sky High Holistic.

The Santa Ana Police Department has also placed the three officers on paid administrative leave, pending the outcome of appeals.

The Orange County District Attorney's Office said the snack items consumed by the three officers during the raid did not contain marijuana, disputing allegations from attorneys representing the shop that the cookies were "edibles" - or food products laced with the drug.

The three officers are scheduled for arraignment on April 11 in Santa Ana.

The charges stem from a raid on May 26, 2015 of the dispensary on 17th Street in Santa Ana, based on allegations the business was operating without a permit.

During the raid, officers disabled a 16-camera surveillance system, as they are legally authorized to do under standard protocol, according to the District Attorney's Office.

But they were not aware of a second, hidden system that had four cameras. That system recorded the police actions that happened during the raid.

Last year, attorneys for the pot shop released that footage, which appeared to show officers joking about kicking an amputee in a wheelchair and eating items from the dispensary's break room which the attorneys claimed were edibles. The footage also allegedly showed Sontag banging and smashing the disabled cameras and lenses.

The attorneys filed suit against the city in July.

"Snacks from the break room, that's there for staff. They're accused of taking protein bars and cookies," said Roxi Fyad, a spokesperson for the Orange County District Attorney's Office.

She added: "There was no evidence to show that any Santa Ana Police Department personnel ingested any edibles with marijuana."

An attorney for the shop on Monday called the actions an appropriate step that shows officials are willing to hold officers accountable for their actions. But he stood by his original allegations that the officers ate marijuana edibles.

Attorney for #SkyHigh on charges against #SantaAna PD officers: "It's a start, but I stand by my allegation that they ate edibles."

"Because some were consuming regular food products does not mean they were not consuming edibles," said attorney Matthew Pappas.

Pappas added that while he believes the officers should face appropriate penalties, but not necessarily lose their jobs.

The officers were also seen distributing the snacks to other officers who participated in the raid, but prosecutors said there wasn't evidence showing that those other officers knew the items had been pilfered from the shop.