Both James and Adams made history leading their respective seasons of the franchise.
OTRC 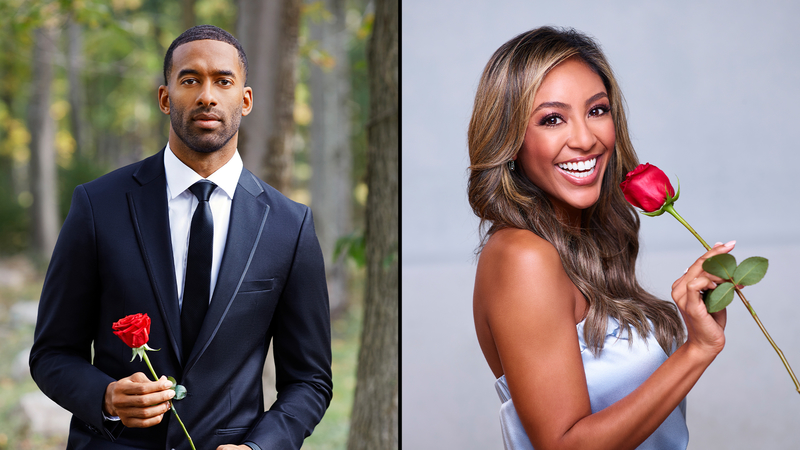 Matt James is making history as the first Black man to lead "The Bachelor" and he's openly discussed how that responsibility has kept him up at night.

James is biracial, but identifies as a Black man: "If you didn't see my mom, you wouldn't know that I was half-white. So that's how I present, I present as a Black man."

So, what does it mean to be biracial on a national television show? James told Harrison that the responsibility weighed on him as a result of his own experiences growing up.

"I experienced what it was like to be the product of an interracial marriage and it's tough," James said.

Bachelor Nation recently watched Tayshia Adams' fairytale love story on season 16 of "The Bachelorette." When asked what her favorite part about being on the show was (aside from getting engaged to Zac Clark), Adams told On The Red Carpet that she was incredibly grateful to represent both of her cultures onscreen.

"I'm biracial, both Mexican and African American. The fact that I can represent so many women out there that look like me has been an amazing opportunity," Adams said.

Adams was the second woman of color to lead the show, after Rachel Lindsay on season 13, and the first bachelorette to begin her journey to find love mid-season.

James wants audiences to know when they watch "The Bachelor," they're watching a man fall in love and he just so happens to be Black. However, race does play a factor when building relationships with marriage in mind and they address that on the show.

"I want kids and our kids would have to deal with a lot of what I dealt with," James said, teasing that audiences will get to see that conversation with bachelorette Rachael, 24, play out on screen.

James' history-making season of "The Bachelor" also features a diverse group of women, including Abigail, 25, the first hearing-impaired contestant on the show.

Abigail opened up to James about her disability on the show, a conversation which lead to Abigail getting the first impression rose during the premiere episode.

Abigail Heringer, 25, stole James’s heart during night one on this season of #TheBachelor and opened up to James about her disability on the show. @ReeveWill has all the details.@BachelorABC https://t.co/XktmQeq6Td pic.twitter.com/EQVJUJ59Da

"Everything that I'm looking for was personified in Abigail and you're nervous going into something like this because you're like, 'Do these people exist on this type of platform, this type of show?'" James said. "It was just so refreshing to have that conversation and her be vulnerable."