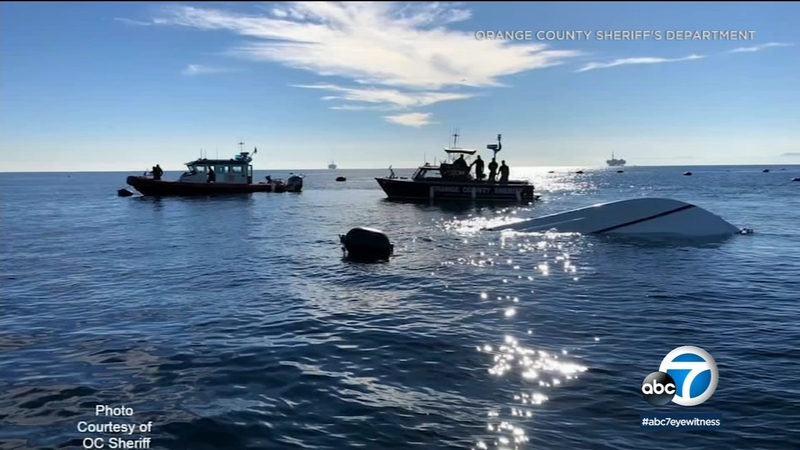 HUNTINGTON BEACH, Calif. (KABC) -- It's been nearly a year since Patty Poynter lost her husband in an offshore sea fishing accident not far from Huntington Beach. She's still trying to come to grips with how someone so experienced could lose his life in a seemingly routine day of fishing.

"He knew all about the lures, the reels, the rods," said Poynter, who lives in Westminster. She says she remembers Jan. 3, 2019, like it was yesterday.

"I did get up with him that morning. It was early, and made him his coffee," she said.

But hours later came a devastating phone call from a family member. Poynter would never see her husband alive again.

"All I knew was that he was in an accident, and we had to get to the hospital," she said.

Poynter would later come to learn that her husband had been out fishing with a friend above an underwater seafood farm called Catalina Sea Ranch approximately six miles off the coast of Huntington Beach. According to the company website, Catalina Sea Ranch is the first offshore aquaculture facility in U.S. federal waters that farms mussels on underwater grow lines.

But according to an accident report put together by the Orange County Sheriff's Department, one of Catalina Sea Ranch's grow lines had broken free and floated to the surface. When the propeller to the boat Maynard Poynter was onboard became tangled up with the rope, it took only seconds for the vessel to flip over and start sinking.

An attorney representing the Poynter family tells Eyewitness News the facts in the accident aren't in dispute. According to the OCSD accident report, the Catalina Sea Ranch operations manager said the broken line was discovered on Dec. 17, two weeks before the accident. Because they were unable to use their cranes to fix the line, they secured it "the best they could."

"They tried to tie it off about two weeks before this incident," said attorney Matthew Easton. "But (they) didn't take the steps to make sure it was fully secure and couldn't float up to the surface and become a hazard."

Easton has sent a demand letter to Catalina Sea Ranch informing them that the family intends to file a lawsuit. According to the OCSD accident report, the primary cause of the accident was the broken line that had been tied off, creating an unseen hazard that would have been very difficult to avoid. The report also states an additional contributing factor was the boat's excessive speed through the area.

Still, the Poynter family maintains that the accident could easily have been avoided had the line been properly repaired.

"You go out for a good day for fishing; being out, and having that challenge of catching a fish," said Patty Poynter. "You would not expect to have an accident like this."
Report a correction or typo
Related topics:
huntington beachorange countylawsuitfishingboat accident
Copyright © 2022 KABC Television, LLC. All rights reserved.
TOP STORIES
7th Highland Park parade mass shooting victim dies
Man dies after being injured by illegal firework in Montebello
IE woman viciously attacked by security guard outside bar, video shows
Parents of late NFL star Demaryius Thomas reveal he had Stage 2 CTE
Highland Park 4th of July parade shooting survivors speak out
Brittney Griner writes letter to Pres. Biden pleading for his help
What we know about 7 victims of July 4th parade shooting
Show More
Some skip Fourth of July celebrations to protest for abortion rights
Illegal fireworks light up night sky across SoCal on July 4th - Video
11-year-old boy dies from fireworks
Hit-and-run driver sought after man in wheelchair killed in LA
Grand Park 4th of July Block Party returns after 2 cancellations
More TOP STORIES News