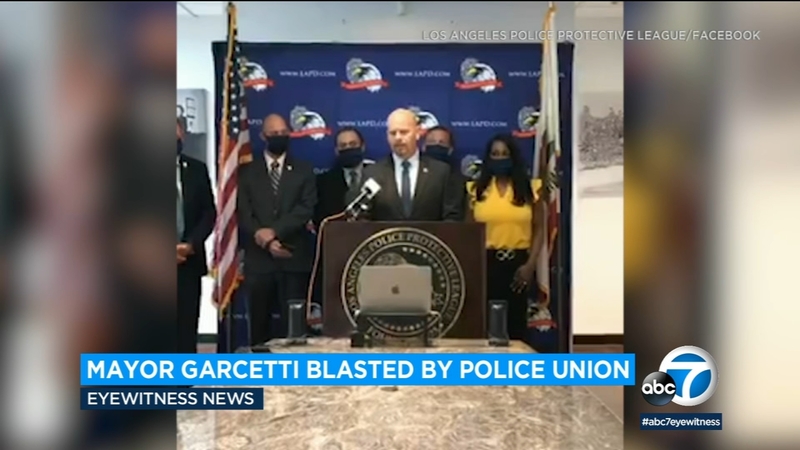 After the outrage over George Floyd's death arrived in the city, sparking some violent protests last weekend and clashes between protesters and police, Garcetti responded with his plans to address their concerns.

On Wednesday, he announced the city would abruptly reverse plans for boosting LAPD's spending and instead redirect $250 million from the city budget into programs for health care, jobs and "healing" aimed largely at the black community.

Garcetti on Thursday had been addressing a forum of black leaders when he made a remark about change that agitated the union.

The Los Angeles Police Protective League on Friday labeled Garcetti "unstable" and accused him of political pandering after he referred to "killers" in remarks about the proposed spending change.

"Now, with the current crisis situation in Los Angeles, we are honestly concerned about his mental health, and I think he should seek some help," says Det. Jamie McBride, a union board member.

The union on Friday issued a statement requesting a crisis response team be sent to the mayor "because Eric has apparently lost his damn mind." Members of the union saw Garcetti's remark directed at them, as well as "the law enforcement community throughout the world," and warned the cut in spending would lead to more crime.

"He called us killers. Not just us, also the rest of the law enforcement community throughout the world," said McBride.

At a Friday briefing, the mayor said the shift in funding "is not an attack on any police officers," but would come from agencies across city government. He said his comment on "killers" was misunderstood - he said he was referring to the collective burden of society for injustices that remain in the black community.

"We collectively have a choice of whether we'll be those who heal or whether we'll continue being the killers," he said. "I won't have those words distorted."

And while Garcetti praises the work of officers, he also is showing critics that he has heard their calls for reform. Officials will identify as much as $150 million to slash from the LAPD budget of nearly $2 billion. He has also suggested independent prosecutors could be a possible solution in pursuing police violations.

The pending cut in police funds represents a sharp break from Garcetti's predecessors, including Antonio Villaraigosa, who made increasing the size of the department a priority.

Union Vice President Jerreta Sandoz accused city leaders of pandering to the fraction of protesters who were destructive. At a meeting with Councilmember Monica Rodriguez, Sandoz' words drew applause from scores of officers at LAPD's Valley station.

"You bowed down to Black Lives Matter. These police officers who are out here protecting the city - if not for them this city would be burnt down right now," Sandoz said.

The union on Friday cautioned viewers of social media that clips of officers engaged in force are not seeing the context prompting the force.

"So for the city leaders now to turn their back on the officers who kept the city as safe as they could. It is disgusting," said McBride.