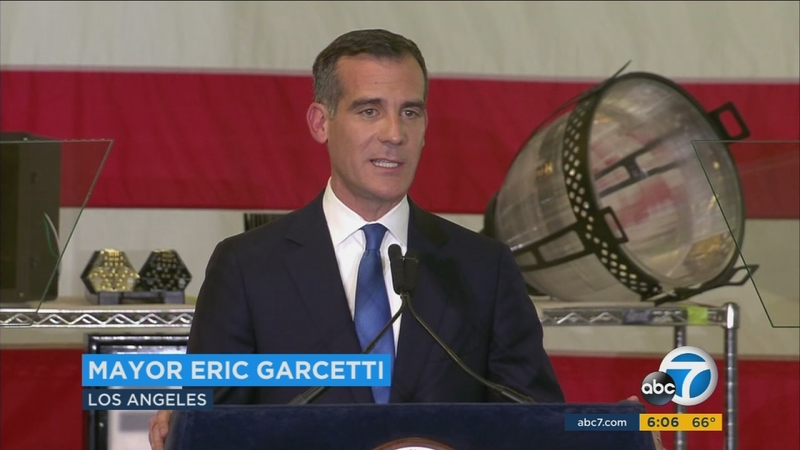 Delivering his annual State of the City address on Thursday, Garcetti also said the city is looking at plans to put 260 new cops on the street, fix more broken sidewalks and streets, fight homelessness and create jobs for reformed ex-gang members.

He is working on the college plan, he said, in partnership with LAUSD and the Los Angeles Community College District. He said it is similar to a program announced by President Barack Obama in his State of the Union last year that sought to offer two free years of community college to U.S. students.

"Tonight Los Angeles will become the largest city in the nation to commit ourselves to a new goal: every hardworking student who graduates from LAUSD will receive one free year of community college," Garcetti said.

A spokesperson for the mayor said the deal is not done yet, but when finalized it would start in 2017. Funding would come from the community college district, the city and a private philanthropist.

Garcetti spoke at Noribachi, an LED manufacturer in LA's Harbor City neighborhood that relocated from New Mexico four years ago and has since won national recognition for its rapid growth.

The mayor focused primarily on jobs, wages and businesses in his address. He said under one city program, launched by City Attorney Mike Feuer, the city will provide education and job training to 1,500 former gang members.

Garcetti said he also expanded the city's program to match young people with jobs, tripling the number from 5,000 when he took office to an expected 15,000 this year.

He noted that the city expects to hire 5,000 new employees over the next two years, and recruiting for those positions will target communities in need, including ex-offenders.

He also said the city needs to step up its efforts to fight homelessness. The city budget Garcetti will propose next week will commit $138 million to get homeless people off the streets, a figure he described as a "tenfold" increase in the city's investment.

Next year, he said, the city will place a comprehensive measure to fight homelessness on the local ballot that will include a "linkage fee" on developers who build new projects.

Garcetti has also recently been touting the 109,000 jobs that the city has added since he took office in 2013 and the 5.8 percent unemployment rate, about half of what it was in 2012.

The focus on job creation follows a year in which Garcetti and the City Council adopted a measure to raise the minimum wage in Los Angeles to $15 an hour by 2020, creating fears among businesses that the city could lose jobs.

Garcetti urged Angelenos to support him in his vision for the city, which he said includes plans not just to fix problems for the next few years, but for an entire generation.

"If Kobe Bryant could post 60 points and lead his team to victory in his final game, come on guys we can do this," he said.