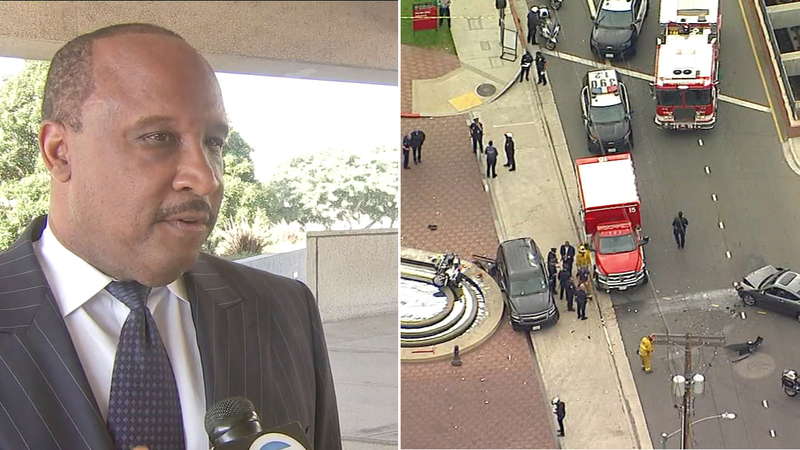 LOS ANGELES (KABC) -- One of the vehicles that was involved in a collision that injured a Los Angeles police motorcycle officer and launched him into a fountain at the University of Southern California was driven by Inglewood Mayor James Butts, a law enforcement source says.

AIR7 HD was over the scene near an entrance to the university around 9 a.m. Tuesday near Exposition Boulevard and Pardee Way.

Mayor James Butts, according to the source familiar with the investigation, was at red light waiting to make a left turn when he proceeded into the intersection. A car coming the other direction had the green when the two vehicles collided.

The longtime LAPD motor officer, who was near his bike with his helmet on, suffered substantial injuries in the collision but is in stable condition.

"He was stationary in front of the water fountain on campus at USC..., and he was struck by the black SUV at that position. It struck him and it threw him into the fountain," explained LAPD Capt. Giselle Espinoza.

Video shot by AIR7 HD appears to show Mayor Butts at the scene with police officers and another unidentified man. It's unclear if anyone else was inside the SUV.

First responders were seen treating a woman and her 4-year-old child, who was not hurt.

The officer was held overnight for observation at Cedars Sinai Hospital.

The city has not commented about whether the mayor was involved in the accident.