LAUSD has no regrets over failed Measure EE, vows to fight on 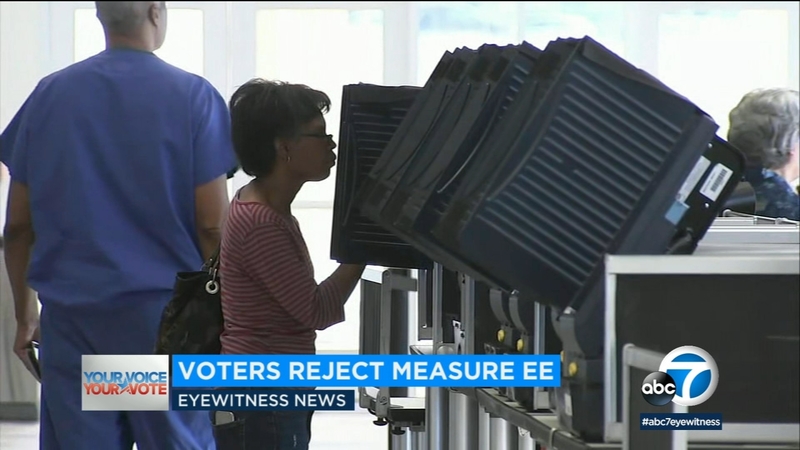 LAUSD has no regrets over failed Measure EE, vows to fight on

LOS ANGELES (KABC) -- LAUSD Superintendent Austin Beutner is showing no regrets about the failure of ballot Measure EE, which would have brought in roughly $500 million a year for the district.

"Plan A was yesterday, Plan B is today, and we'll see if Plan B works," said Beutner. When asked what Plan B is, he said "stay tuned."

The money would have gone toward lowering class sizes, adding nurses and librarians and hiring more teachers. UTLA President Alex Caputo-Pearl said they knew it would be an uphill climb with two thirds of the vote needed and a tight timeline following January's strike.

Those opposed were successful at selling EE as a massive tax increase targeting business owners.

"The L.A. Chamber of Commerce, the Howard Jarvis Association and Donald Trump's biggest California donors. They lied about what was going to be taxed. They lied about how renters might be affected," said Caputo-Pearl.

"We're going to continue to work to make sure the entire business community can support what happens in schools because the single best investment you can make as an employer is in the school where your employee goes to school or their kids go to school," said Beutner.

What's next is unclear. Beutner says LAUSD will ask the state legislature for help with funding and he didn't shut the door on another ballot measure. Mayor Eric Garcetti says he owns every success and failure that comes through his office.

"But when they say, what are they going to do to end homelessness, I say homelessness starts in a classroom, when a child facing...sorry," said an emotional Garcetti as he paused. "When a child is in the foster care system, comes here and you have a parent in the form of a teacher and a counselor, an administrator. We complain that there's too many people in prison, where does that begin. It begins when we fail a child in the classroom."
Report a correction or typo
Related topics:
educationlos angeles countylausdvotingballot measureproperty taxes
Copyright © 2022 KABC Television, LLC. All rights reserved.
RELATED
Measure EE appears to be falling short of two-thirds majority needed
TOP STORIES
Kobe Bryant's widow discloses witness list for trial over crash photos
3 Canadians shot, 1 fatally, at ​resort near Mexico's Playa del Carmen
Laundrie claimed responsibility for Petito's death in notebook: FBI
Boy, 14, dies after being shot in head in Pasadena; suspect arrested
Louie Anderson, Emmy-winning comedian, dies at 68
High wind warning issued for parts of SoCal as strong winds move in
Kamala Harris to discuss wildfire recovery efforts during SoCal visit
Show More
3 men accused of attacking father and son outside of Toluca Lake pub
Lawsuit accuses Mater Dei athletics coach of raping student in 1980s
Proposal could make rooftop solar panels in CA more expensive
19-year-old killed possibly by stray bullet in South LA
Memorial service for LA County firefighter killed in fire
More TOP STORIES News