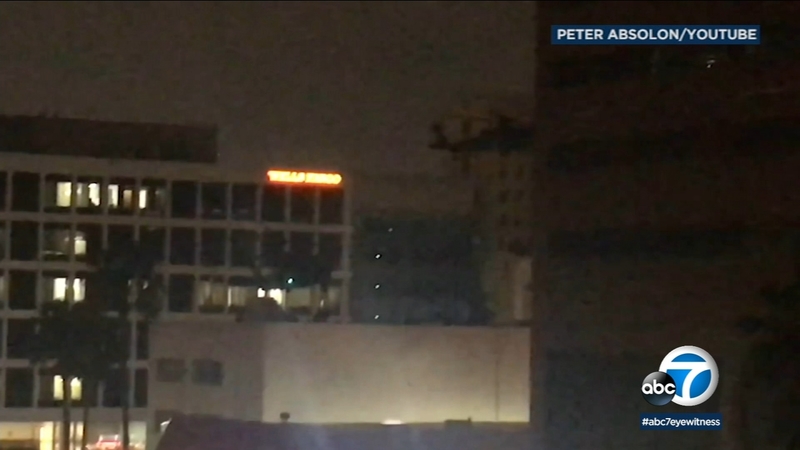 LOS ANGELES (KABC) -- Army helicopters landing on Wilshire Boulevard and other military activities are turning parts of Los Angeles into scenes from a war movie this week.

The military is conducting training exercises, but they have caught many locals by surprise.

When a helicopter flew low in between buildings in downtown Los Angeles, it raised a few alarms.

"We don't think it was much higher than the steeple of the church across the street," said Erica Gallo of Lincoln Heights. "They were low - low enough where you could see inside."

Military helicopters have been flying low around Los Angeles this week in training exercises that are rattling nerves of some residents.

Gallo and Leslie Ruiz were in nearby Lincoln Heights. They saw the helicopters and say they were loud.

"Four smaller helicopters in the front but the lights are all turned off and there was only red lights in each one of them and then another military helicopter came in - it was much bigger," Ruiz said.

According to the LAPD it's all part of a U.S. Army training exercise to teach soldiers skills and how to operate in an urban environment.

The department said residents could hear sounds of aircraft and weapon simulations.

Officials say the local terrain in Los Angeles provides the Army with unique locations and urban environments that service members may encounter when deployed overseas.

Some people feel they should have been warned about this.

"I do think it would be nice to get a heads up you know?" Gallo said. "Nowadays you just never know what's happening and we're talking about it - everybody has a fear especially after 9/11 happened. When you see helicopters or airplanes that are flying too low."

A statement by the LAPD said in part "This training is coordinated with the appropriate state, county, and city officials as well as private property owners. Safety precautions have been implemented to prevent unnecessary risk to both participants and/or area residents and property."