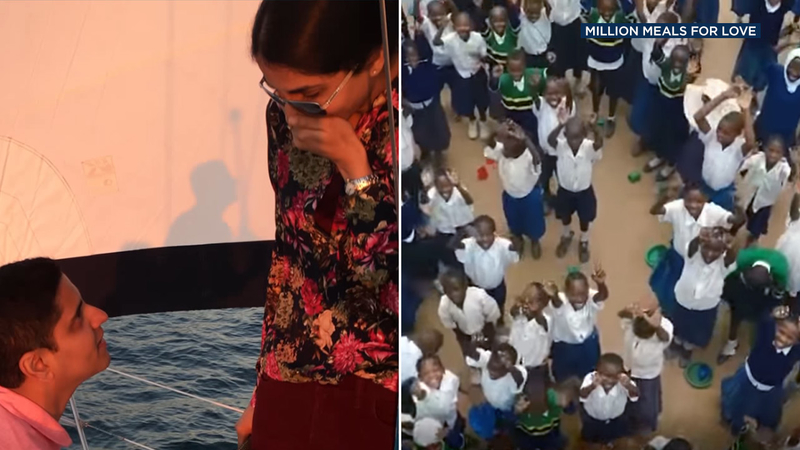 SANTA MONICA, Calif. (KABC) -- A Santa Monica couple decided to donate the budget for their wedding to make a difference for starving children in Africa.

Poonam Kaushal and Nishkaam Mehta will tie the knot on Valentine's Day, but their wedding decor strays from traditional Indian weddings.

"The notion of a big, traditional Indian wedding didn't really feel like it fit us," Kaushal said.

Instead of throwing a week-long lavish Indian wedding, Kaushal and Mehta rallied behind a cause: Feeding children in Cameroon impacted by Boko Haram violence.

"For 50 cents you can give a day's rations to a child in a conflict zone," Mehta explained.

"What money we would have spent on our wedding, by putting it into something that's not just for one day, these school meals, they're providing nourishment for a year," Poonam said.

The couple used their $20,000 wedding budget to fund 40,000 school meals through the World Food Program's Share the Meal app.

Kaushal and Mehta also launched a campaign encouraging their family, friends and the community to join their team - Million Meals for Love - to raise enough money to fund 1 million meals before their wedding.

"It's never been easier to donate. Right now you have 20 times more smart phones than you have hungry children in the world," Mehta said.

"Children that don't have a voice and they don't have advocates, so to be able to bring awareness to that, for us, has been deeply fulfilling," Kaushal said.

The couple said the donation was a way to honor their love and start their life together by helping others and hopefully inspiring others along the way.

"We have the ability and the choice that we can actually do for others, even with significant life milestones, whatever is within our means," Kaushal said.