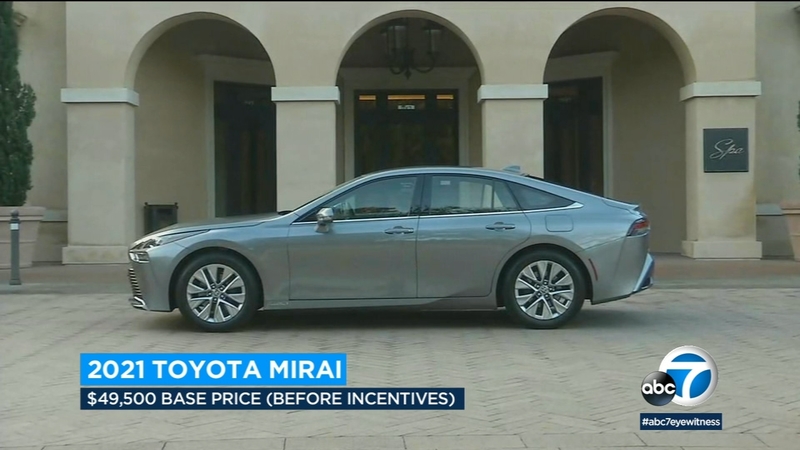 Toyota made history in 2015 when it brought out the Mirai, the first production fuel cell vehicle available for sale to the public. It was innovative, but many people felt it was less than attractive.

Now there's an all new version that amps up the looks, along with everything else. The 2021 Mirai arrives on a new platform shared with Toyota's Lexus division, a lower price, more power, more efficiency, more tech, and last but not least, more style.

You could almost mistake it for a Lexus at first glance, not only outside, but inside. The looks may have improved but it's still a fuel cell underneath. That's essentially an electric car that makes its own electricity on-board via compressed hydrogen, passed through the fuel cell. Toyota's been able to improve the fuel cell itself too - smaller but with increased driving range, up to 400 miles. There's more power under the hood from the electric motor, for quicker acceleration. The new Mirai has a starting price of $49,500 before incentives.

Of course the question always comes up, 'Where do you get hydrogen?' Well, more places than you used to be able to; they're adding stations all the time. In fact, some are in locations that you may have driven past and didn't even notice that they were there.

Early hydrogen fueling stations were mostly stand-alone, and few and far between. But there's a 76 station off the 5 in south Orange County, where a hydrogen pump has been added. There's a new one at a Chevron station off the 101 near Universal Studios, and there's another at an Arco right in the middle of South Pasadena.

Literally dozens of fueling spots are being added each year, though essentially in California. If you want to drive to the Grand Canyon, you'll be driving something else. But for your in-state trips, the new Mirai includes $15,000 worth of free hydrogen. Toyota estimates that to be about three years' worth for most drivers.

Toyota's betting big on fuel cell technology, while also continuing its dominance in gas-electric hybrids and promising plug-in battery vehicles, too. The company's fuel cell tech is now getting a workout in the trucking industry, starting at places like ports and along transport corridors in the state. In a partnership with Kenworth, the company scaled up its fuel cell technology to power big-rig commercial trucks.

You won't see a lot of new Mirais on the road, as it's still a low-volume car. But when you do see one, there's a better chance you'll be impressed with its looks.