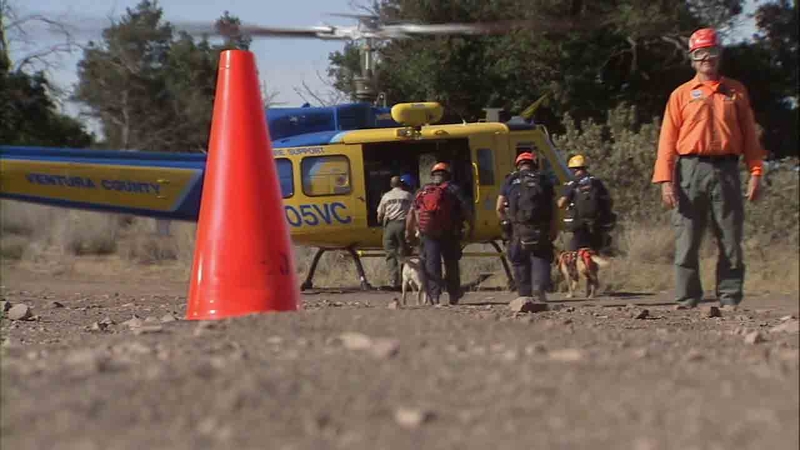 "He may be injured and unable to signal us or get to our rescuers, but with all the missions being flown back there and all the folks on the ground, you know, one would expect, if he is ambulatory at all, that we would have encountered him by now," Ventura County Sheriff's Sgt. Eric Buschow said.

Rescue crews have stepped up the search, using a mounted patrol unit and aerial drones equipped with infrared cameras. Two helicopters have been shuttling crews in and out, manpower has doubled in a day and more dogs are involved.

The Homeland Security rapid response team returned for a second round after spending more than six hours searching for Herdman and his dog, Duke.

Herdman hasn't been seen since June 13 when he chased after his dog, barefoot and wearing only shorts and a T-shirt, on a hiking trip with his friend. Duke has been spotted twice, but he escaped both times. Officials are hoping that it's an indication that Herdman is nearby.

On Friday, a special team with the Los Angeles Animal Services Department was sent in to look for Duke, hoping that he'd lead them to Herdman.

With help from L.A., Orange, Fresno, Kern and San Luis Obispo counties, the Ventura County Sheriff's Department admits this operation is different from others.

"The scope is not often that these type of searches go for many days," Buschow said. "Typically, people are found in a day or two."

Four rescuers have needed medical attention over the last few days, one person with a rattlesnake bite, two for dehydration and one person for a leg injury.

"It's steep, it's rough, and there are a lot of potential hazards to rescuers," Buschow said.

The search was scheduled to resume Saturday morning.