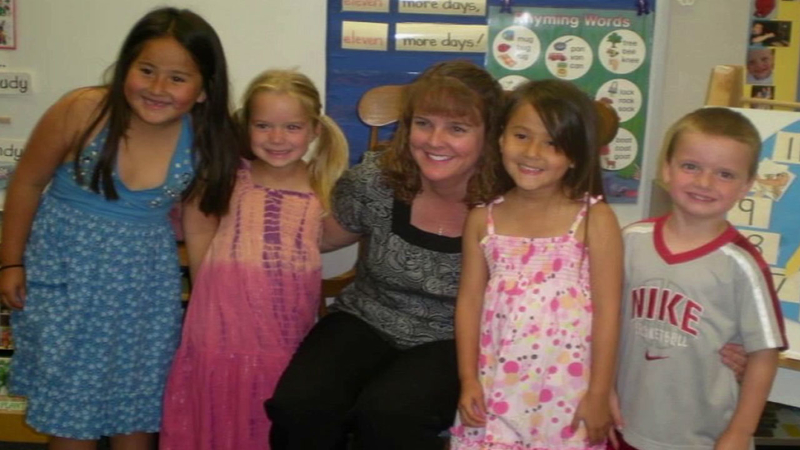 MISSION VIEJO, Calif. (KABC) -- Kristyn Fletcher is fighting for her life, while fighting to keep her health insurance.

For 20 years, the wife and mother-of-four has taught kindergarten at Cordillera Elementary School in Mission Viejo. But she's been unable to teach for nearly a year, since being diagnosed with a rare form of appendix cancer.

"I've been told by both of the specialists that it's incurable," Fletcher said. "It's very rare so what they're doing is just trying to prolong my life and make it, you know, as meaningful as possible."

Right before surgery in January, Fletcher says the Saddleback Valley Unified School District told her she had used up her sick time and would be dismissed in two weeks.

Her colleagues immediately stepped up and donated 60 days of sick leave allowing her to continue receiving health benefits until May 11. She's been told she will be terminated May 12.

The 47-year-old Rancho Santa Margarita resident, who is undergoing another round of chemotherapy, is faced with disability retirement. At half her salary and no medical benefits, she's ineligible because she's under 50.

Fletcher says she's unable to pay $2,000 a month for COBRA Insurance to keep her existing coverage.

"It's really sad that the district has decided to cut her off. She's been a teacher here for a very long time and an amazing one," said Jessica Lischerelli, whose two 13-year-old children had Fletcher as their teacher.

Fletcher's supporters attended a Saddleback Valley board meeting Thursday hoping to convince the board to maintain her benefits.

"They basically just said we've done everything we can do for you," Fletcher said.

"As a District, we are bound by contract language of the Collective Bargaining Unit that certificated staff members belong to and cannot unilaterally implement alternate retirement provisions," Blakely said in a written statement.

The district and its teachers union are negotiating a new contract.

"The Association has indicated to the District that it is willing to work together to explore options that would benefit Kristyn Fletcher, as well as other members who might face similar challenges," said Daniel Moon, President of the Saddleback Valley Educators Association.

Fletcher says she hopes it leads to change.

"It's a very helpless feeling, it really is," she said.

A YouCaring account has been set up for Fletcher. You can donate here: http://www.youcaring.com/medical-fundraiser/kristyn-fletcher-fighting-for-another-day/317173.