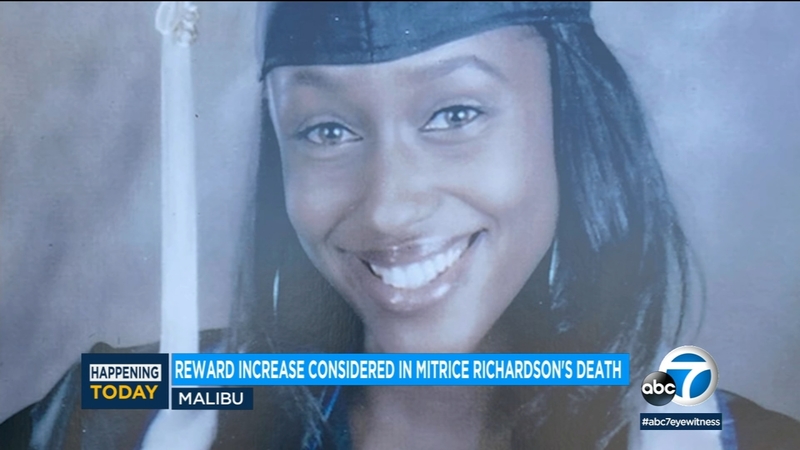 LOS ANGELES (CNS) -- The Los Angeles County Board of Supervisors today increased and extended a reward offered for information leading to a conviction in the death of Mitrice Richardson, a woman who went missing after being released from the sheriff's Malibu-Lost Hills Station in 2009.

Richardson was released Sept. 17, 2009, from the sheriff's station in Calabasas about 1 a.m. without transportation, a cell phone or her purse. The 24-year-old Cal State Fullerton graduate had been arrested the previous night when she was unable to pay her $89 bill at Geoffrey's, a Malibu restaurant. Deputies also found some marijuana in her car and impounded it.

After her release, however, she disappeared. Neighbors reported seeing a woman who may have been Richardson sleeping on a porch later that morning, but she was gone by the time deputies arrived. Sheriff's deputies and volunteers mounted extensive air and ground searches, to no avail.

She remained missing until August 2010, when skeletal remains were found by state rangers searching an abandoned marijuana farm in the unincorporated Monte Nido area, which is close to the sheriff's Lost Hills Station. The remains were identified as Richardson, using dental records.

The Board of Supervisors initially offered a $10,000 reward for information into Richardson's disappearance in 2009, before her remains were found. It was re-established in 2010 and again late last year, but it is set to expire on Sunday.

The board on Tuesday extended the reward and increased it to $20,000 for any information leading to the arrest and conviction of the person or people responsible for her disappearance and death.

The cities of Malibu and Calabasas also still have standing reward offers totaling $20,000 in the case.

ABC7 examines the case of Mitrice Richardson, who, before going missing, appeared to have a mental health crisis in an upscale Malibu restaurant.

An exact cause of Richardson's death was never determined, but authorities at the time insisted there was no sign of foul play - a contention challenged by her family.

Richardson's disappearance led to an outcry by her relatives and others about the actions of sheriff's deputies in their handling of her arrest and release.

Investigators have said they have found evidence in Richardson's diaries and text messages that she was suffering from bipolar disorder and may have been awake for as many as five nights when she had what appeared to be a mental breakdown on Sept. 16.

Her mother, Latice Sutton, contended that authorities should have recognized her daughter's erratic behavior as abnormal and given her a mental-health evaluation. Her father said she should have been placed on a 72-hour psychiatric hold, rather than being released.

The county's Office of Independent Review concluded in a report that deputies at the Malibu station acted properly the night Richardson was released.

Watch the documentary now streaming on Hulu or by downloading our free ABC7 apps.

"Although station personnel offered Ms. Richardson the choice to remain voluntarily at the station jail until the arrival of daylight hours or her transportation, she chose to leave the station jail,'' according to the report, copies of which were released by the Sheriff's Department.

"OIR has closely monitored the department's actions regarding Ms. Richardson's arrest and subsequent release from custody and each phase of the department's efforts to learn what occurred at Geoffrey's restaurant and at the station and to search for her,'' the report states.

As a result of the monitoring process, OIR has concluded that the station personnel acted legally and reasonably in taking Ms. Richardson into custody and then releasing her from custody.''