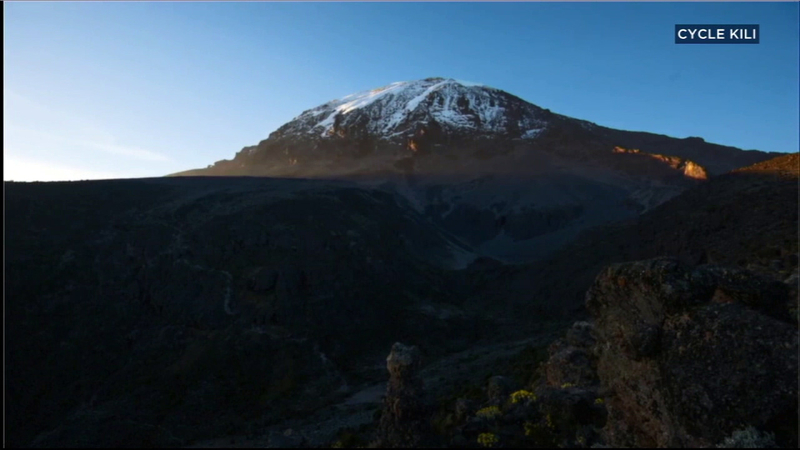 LAGUNA BEACH, Calif. (KABC) -- An Orange County man is taking on a challenge he said has never been accomplished. Rob Nelson, a former professional tennis player, is in final preparations for his biggest match yet.

"I love doing something as simple as pedaling a bike that can create cause and create a story line," Rob Nelson said.

Rob Nelson wears a training mask while working out. It simulates oxygen levels at 18,000 feet.

He's about to attempt a six-day climb of Mount Kilimanjaro, all on a mountain bike.

"This distinction is, it's the first full ascent on our bikes, cycling the entire time up to 19,341 (feet) and descending the same way," Rob Nelson explained.

All of his effort will be for charity. Rob Nelson is riding to raise money for "Treasures of Africa," a children's home to orphans and abandoned children at the base of the mountain.

The ministry is celebrating 10 years of raising future leaders.

"We took in children at that time that were some were infants, some were older children and now 10 years later, we have children that are in colleges and universities," said Rita Langeland, the founder of the ministry.

Rob Nelson won't be going alone. He'll be joined by his son, Tate Nelson, an MMA fighter, and their friend, James Lawrence, an ironman competitor.

The trio's encouraging people to donate and watch their progress on the website cyclekili.com.

"It's a different slant, the intention is to equal in elevation the amount of money that I want to raise, $1.9 million," Rob Nelson said.

Rob Nelson knows this is a huge challenge, but said it's a small sacrifice to help the children.