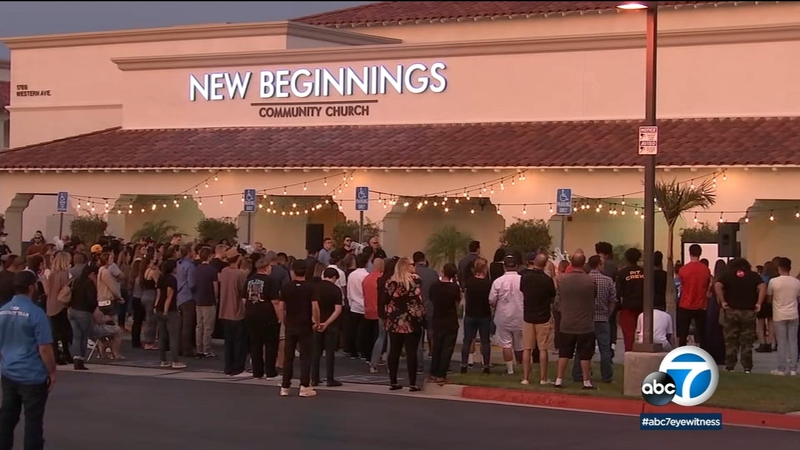 NORCO, Calif. (KABC) -- Vigils were held Friday for the two victims in the deadly shooting at a movie theater in Corona.

There was an outpouring of emotion at New Beginnings Community Church in Norco in honor of Goodrich. Goodrich's heartbroken parents were joined by dozens of her friends and former high school classmates. They shared memories of a kind, caring teenager who always wanted to make others happy.

"Everywhere you went she lit up the room with her smile," said Alex Apatiga, a former high school classmate of Goodrich. "She was always nice to everybody."

Another large crowd attended a vigil for Barajas at Santa Ana's Mater Dei High School, where he was a standout soccer player. Barajas is a well-known TikTok user with more than 960,000 followers.

Goodrich and Barajas were at a showing of "The Forever Purge" at the theater on Monday when they were shot, police said. The teens are friends and went to watch the movie together, investigators said. Theater employees discovered the victims who had been shot execution-style after the movie, sources say.

Officials say it appears the deadly shooting was unprovoked, and there was no indication the suspect, 20-year-old Joseph Jimenez, knew the victims. Authorities also said no one involved in the crime had gang affiliations.

Jimenez appeared at a court arraignment Friday, after which he was verbally confronted by the woman's father. He wore handcuffs and an orange jail jumpsuit as he walked toward a courtroom exit.

As he passed Goodrich's father, the father exclaimed: "Hey, look at me, bro! Look at me! Look at me, dude! That was my ..." His voice trailed off as he burst into tears and was comforted by a friend.

The man accused of fatally shooting an 18-year-old woman and wounding her friend at a Corona movie theater appeared in court, where he was verbally confronted by the woman's father.

Jimenez was arrested at his home in El Cerrito Tuesday.

When searching Jimenez's home, police found a firearm that "matched the caliber of the weapon used in the murder" and a wallet belonging to one of the victims, authorities said. Jimenez did have a movie ticket to "The Forever Purge" showing that the victims attended, investigators said.

Another vigil is planned on Saturday at the theater where the shooting took place.