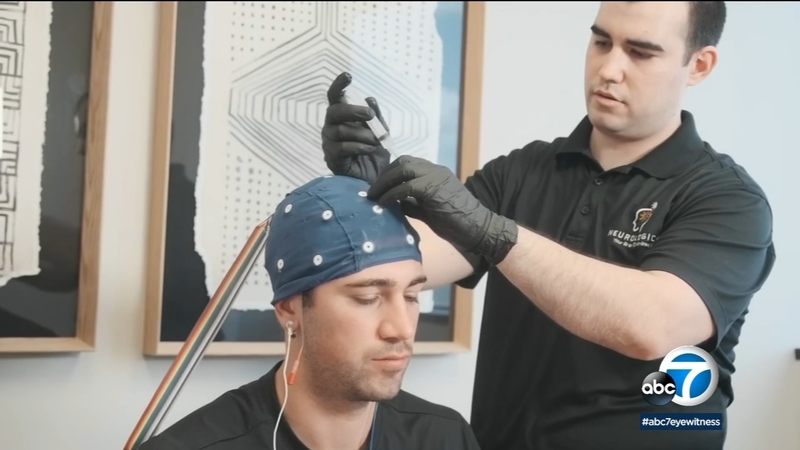 How brain mapping technology is helping those with traumatic injuries

LOS ANGELES (KABC) -- Life can get busy sometimes, but when you add the effects of a global pandemic on top of your day-to-day duties, a mental fog is expected.

But could mapping your brain be the key to fixing it? It's possible.

Eyewitness News spoke with Karen Odell-Barber, the CEO of Neurologics, a company that specializes in brain mapping and brain training for people struggling with traumatic brain injuries and neurological disorders.

She says what they do isn't new, but rather new use for old technology that's approved by the Federal Drug Administration.

"We do brain mapping and neuro-engineering for peak performance," said Odell-Barber. "It's like a trainer for your brain, totally not invasive, FDA-registered, and it takes you through a series of exercises that are customized based on your brain map. That trainer has those protocols loaded and will take me through those exercises in a 50-minute session, and that happens three times a week, and then every two months we re-map the brain to be able to compare the baseline map to the progress being made."

Odell-Barber said some of her team's clients include young children with ADHS and autism.

Meanwhile, Jordan Zumwalt, who used to play for the Pittsburgh Steelers, is taking advantage of the technology.

He suffered a hip injury that cut his NFL career short.

Years before that, Zumwalt suffered a serious scooter accident that landed him in the ICU. He had to get 150 stitches to his forehead, but days later, he was back on the field where he began noticing some cognitive changes.

For millions of people, long-haul COVID-19 is the brutal aftermath of a COVID infection. The group Survivor Corps is helping those battling "long COVID" join together to help ease the suffering.

Those symptoms are consistent with a traumatic brain injury. The athlete describes it as brain fog that interferes with his daily life. Neurologics has been there to help after the scooter accident and later again during his time with the NFL.

"I remember the doctor saying, 'Your brain is not at optimum potential, and your cognitive function is much less than what it should be,'" Zumwalt recalled.

"I was prescribed OxyContin for Lyme disease pain when I was 17 and that really started everything," she recalled. "I was always trying to find the right mixture of different substances to kind of get me to where it was feeling 'normal.'"

Julia said the best treatment centers couldn't help her, but nine months at Neurologics did.

"I've been sober six and half years now and feel solid in my sobriety, which is amazing something I never thought I would have," said Julia.

The treatment is expensive and isn't covered by insurance right now.

"My passionate wish is that we'll get venture funded and we'll be able to afford the process of becoming insurance driven," Odell-Barber said. "That will take two years and I'm all about it. I want it to be available for everyone."