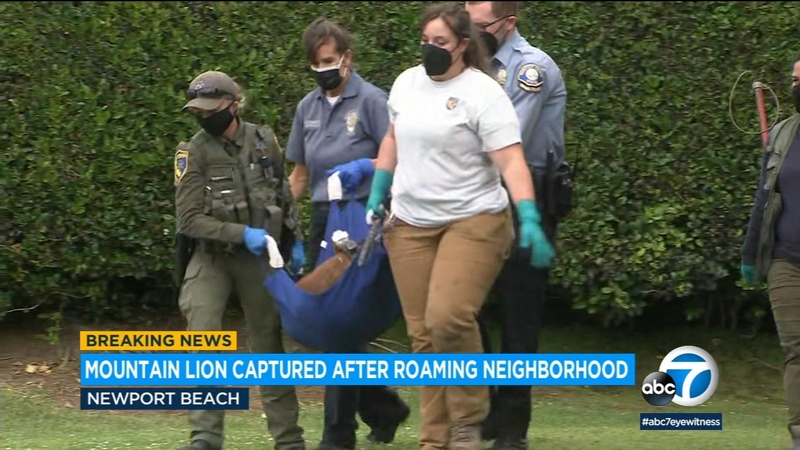 NEWPORT BEACH, Calif. (KABC) -- A mountain lion spotted roaming around a Newport Beach neighborhood Friday afternoon was finally captured by authorities, but not before putting residents on high alert.

Newport Beach police set up a perimeter after the mountain lion was spotted around the 1900 block of Port Cardigan Place in the Port Streets community.

Nearby Andersen Elementary School was notified of the sighting to make sure students were safe.

Police urged residents to bring all pets inside as a precaution.

Newport Beach Police Animal Control and California Department of Fish and Wildlife officers assisted with the search. Officials used drones and concentrated their search in the area of Bonita Canyon Drive and MacArthur Boulevard, going home-to-home looking for the animal.

The animal was eventually located in the backyard of one of the homes in the neighborhood, and was tranquilized by officials.

"I looked in the backyard and saw a tree rustle, and looked, and low and behold, a mountain lion is in my backyard," the homeowner said. "And my dogs are barking, trying to get outside, and I just call 911, and they knew he was in the backyard."

Home surveillance video captured the mountain lion roaming through a the driveway and front porch of a home. The video also shows the animal with what appears to be a tracking collar.

The mountain lion may be M317, the same collared cat spotted earlier this month in Laguna Beach, and at an Irvine shopping center back in March, according to authorities.

Officials say these mountain lions are usually out at night, and this one is probably looking for a good place to nap before roaming the area.

"The presence of a mountain lion or other wildlife in this area may be attributed to the recent Laguna Beach Coastal Fire, which displaced wildlife from their natural habitat," said a statement from the city of Newport Beach Friday.

Officials remind the public that these big cats live in the area, and if spotted, make sure to stay away, and alert authorities.

Fish and Wildlife officials say the mountain lion is going to be transferred to suitable habitat.