NEW YORK -- This week resumed with Taylor and Corrine's fight over whether or not Corrine was smart enough or mature enough to get married. The rest of the women waiting for the rose ceremony thought that the two of them were ridiculous for getting into drama just before Nick was going to make some important decisions. Instead of just letting the situation lie, Corrine ran off to Nick and told him what Taylor said to her.

Then it was time for the rose ceremony. Nick gave roses to:

Sarah and Astrid got cut. Sarah seems like a nice girl, it's too bad! Maybe there could be a place for her in "Paradise." The remaining ladies learned they would be traveling with Nick to New Orleans!

When Chris Harrison arrived at the hotel in New Orleans he revealed that there would be a two-on-one date this week! He left behind a date card that read, "Rachel, Where have you beignet all my life?" That meant that Rachel got a one-on-one date with Nick!

Rachel met up with Nick downtown and went for a walk through the public market. They tried on masks, sampled food, and looked at souvenirs. They strolled hand-in-hand and eventually made their way to a cafe. Nick said that his chemistry with Rachel is "explosive." They chomped down on some beignets while they sipped coffee and powdered sugar was everywhere! A marching band went down the street and the happy couple looked on. They gave them umbrellas and got Nick and Rachel to join in. They danced and kissed, as the other women looked out the hotel's window and saw them in action! They then moved onto a bar where there was a live band playing and they danced and had a great time! Rachel said it was the best time she'd ever had on a date. They spent the rest of the first part of their date exploring the area and kissing. This lady may be a top contender!

As evening fell, Nick and Rachel headed to Mardi Gras World, where parade floats are displayed and stored for the big parade in New Orleans. They sat down to a romantic, private dinner among the floats. She revealed to Nick that she had been to New Orleans for a funeral just a few months before and it put life into perspective for her. Then they both talked about how in love their parents still are with each other, and how in today's world that can be a rare thing. Nick told her, "I might be breaking rules here, but I'm super into you." Wow! That's big! He picked up the date rose and gave it to her.


A date card arrived at the hotel and it read, "Josephine, Alexis, Kristina, Raven, Jaime, Vanessa, Danielle M., Whitney, Jasmine, and Danielle L. Till death do us part." That meant that Corrine and Taylor would be going on the two-on-one date! 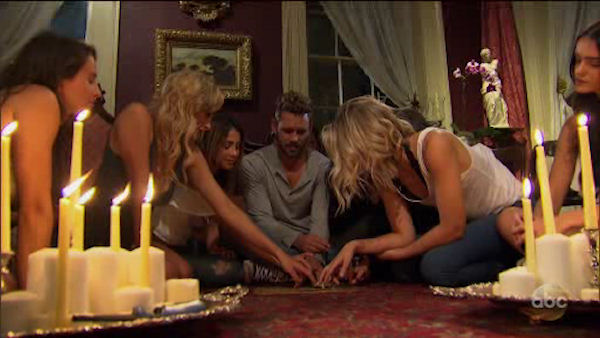 On the group date, the ladies showed up to a haunted mansion with actors inside that put on quite a show. There was a ghost or spirit named "May" that is haunting the place. As they had drinks in the mansion, someone pulls out an Ouija board. It was funny, they asked it if Nick would get engaged and it didn't move. As they asked it about "May" it moved around and the lights flickered and went out. Nick attempted to chat with the women during the date, but suspicious, scary things kept happening. So that seemed a little distracting. One big thing that happened is that Raven told Nick that she was falling for him! Wow! That's big! Then it was time to give out the group date rose, and he decided to give it to Danielle M. who he had great one-on-one time with but poor Raven! She dropped the L-bomb!

Then it was time for the two-on-one! They go into the bayou and they get tarot card readings! Nick looks like he's taking this very seriously. Then Corrine and Taylor both took turns trash talking each other to Nick. "The relationship will be filled with whipped cream and lies!" Taylor said of Corrine. Nick sat down to a table with both ladies and decided to keep CORRINE! Yes! Ha - I'm sorry Taylor, but Corrine is way more entertaining. Nick said it was the most difficult decision he's had to make since he's been on the show. Taylor hugged Nick and then sat at the table alone while Corrine and Nick walked off together, boarded a boat, and zipped away down the bayou.

In an odd way of ending things, Taylor headed back to the tarot card people where they cleansed her and she said that she wouldn't leave without "speaking her piece." Remind you of anyone? Chad maybe? While Corrine and Nick had a romantic dinner, Taylor went on the warpath, determined to take Corrine down. Taylor showed up and said, "I need to talk to you!" to Nick! The preview says that two people go home? So does Taylor's outburst work? We'll have to wait and see. Also, Nick apparently has a mental breakdown and he says that the process may not work and cries in front of all of the remaining women.
Related topics:
arts & entertainmentabcthe bachelornick viallcominguproses
Copyright © 2020 KABC-TV. All Rights Reserved.
COMINGUPROSES