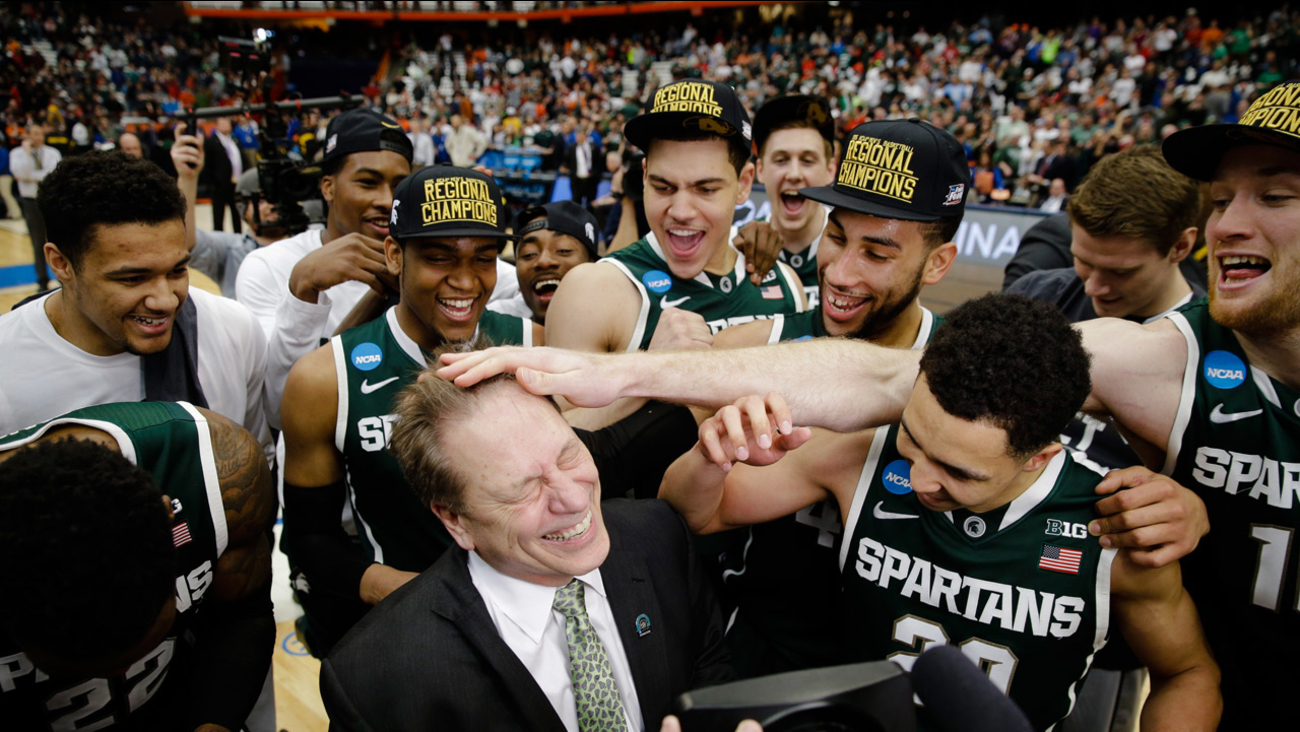 SYRACUSE, N.Y. -- Coach Tom Izzo and the Michigan State Spartans capped an improbable run to the Final Four with an overtime win.

Senior guard Travis Trice scored 17 points and the seventh-seeded Spartans clamped down on defense to pull out a 76-70 victory over fourth-seeded Louisville in a thrilling NCAA Tournament East Regional final Sunday.

The Spartans (28-11), who were nearly counted out of the tournament conversation in February, won for the 12th time in 15 games. It's a run that included them knocking off second-seeded Virginia last weekend and third-seeded Oklahoma in the regional semifinal on Friday.

Michigan State advances to face the winner of the South Regional final between Duke and Gonzaga.

Wayne Blackshear had 28 points for the Cardinals (27-9) in a game that featured 11 lead changes.

It's the ninth Final Four appearance for the Spartans, and first since 2010, when they lost 52-50 to Butler in the national semifinals. Izzo has led them to seven Final Fours including the 2000 national championship.

The Spartans did it with perseverance and with a roster that was regarded as having less talent than the team that lost in the regional final to Connecticut a year ago. Michigan State lost three of its top four scorers.

Trice was so elated and drained following the victory that he fell to his knees at center court and began sobbing. He was joined by his teammates and members of his family.

The Spartans rallied from a 40-32 halftime deficit to eventually build a 61-59 lead with 3:57 left, when Trice hit two free throws.

The Cardinals rallied and had a chance to pull out the victory in regulation. Down 65-64, Mangok Mathiang hit one of two free throws with 4.9 seconds left.

The Spartans then sealed it in the final 31 seconds. Branden Dawson did what Izzo's teams have done well over the years: He put back a 3-point miss by Forbes to put Michigan State up 74-70.

Spartans forward Denzel Valentine then batted away a pass on the Cardinals' next possession, and Trice sealed the win by hitting two free throws with 10.1 seconds left.

Michigan State's defense - Izzo's other trademark - played havoc with the Cardinals. After hitting 17 of 32 attempts in the first half, Louisville managed to make six of its final 32.

It is the third straight year one conference has had two teams in the Final Four. The Southeastern Conference did last year with Kentucky and Florida and the Big East had Louisville and Syracuse in 2013.

The last time the Big Ten did it was 2005 with Michigan State and Illinois.