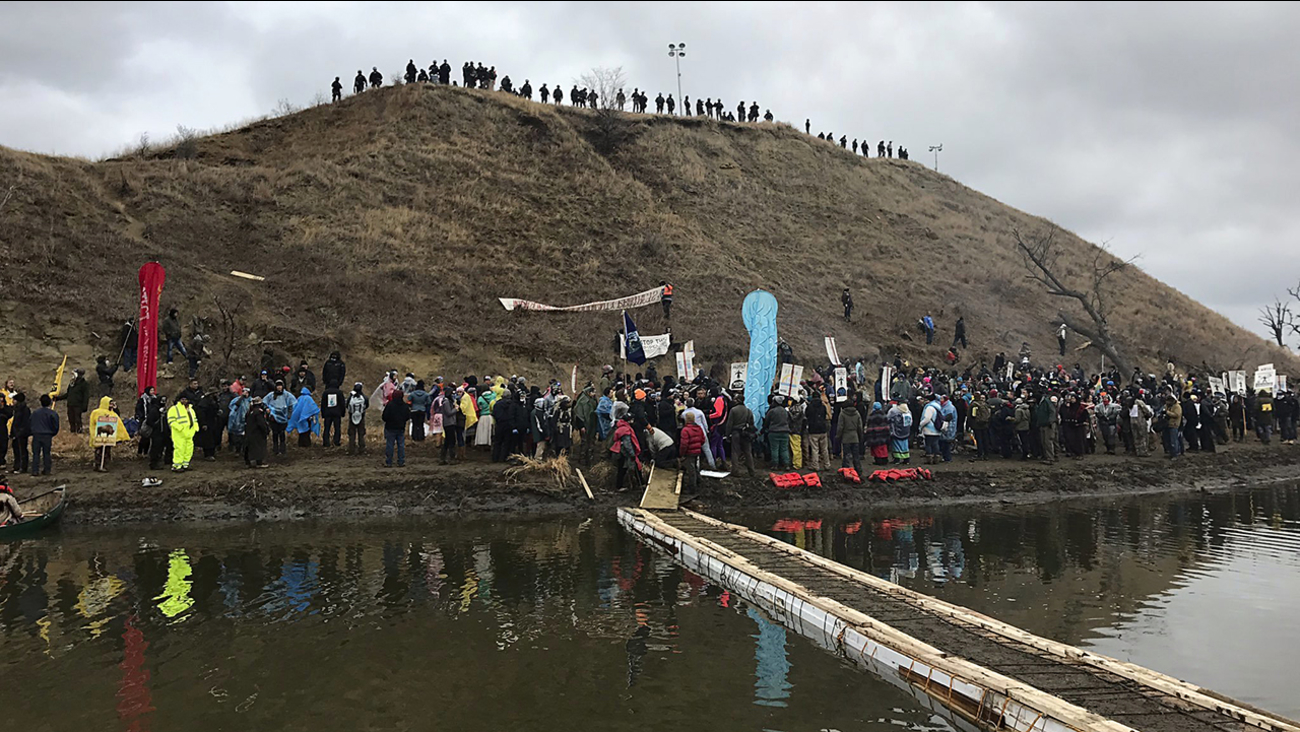 Protesters against the Dakota Access oil pipeline gather at and around a hill, referred to as Turtle Island, where demonstrators claim burial sites are located. (Nancy Trevino via AP)

BISMARCK, N.D. -- The Army said Tuesday that it will allow the $3.8 billion Dakota Access oil pipeline to cross under a Missouri River reservoir in North Dakota, clearing the way for completion of the disputed four-state project.

However, construction could still be delayed because the Standing Rock Sioux tribe, which has led opposition, said it would fight the latest development in court.

The Army intends to cancel further environmental study and allow the Lake Oahe crossing as early as Wednesday, according to court documents the Justice Department filed that include letters to members of Congress from Deputy Assistant Army Secretary Paul Cramer.

The stretch under Lake Oahe is the final big chunk of work on the 1,200-mile pipeline that would carry North Dakota oil through the Dakotas and Iowa to a shipping point in Illinois.

Developer Energy Transfer Partners had hoped to have the pipeline operating by the end of 2016, but construction has been stalled while the Army Corps of Engineers and the Dallas-based company battled in court over the crossing.

The Standing Rock Sioux, whose reservation is just downstream from the crossing, fears a leak would pollute its drinking water.

The tribe has led protests that drew hundreds and at times thousands of people who dubbed themselves "water protectors" to an encampment near the crossing. ETP says the pipeline is safe.

Details of the tribe's legal challenge to the Army's decision were still being worked out, attorney Jan Hasselman said.

But tribal Chairman Dave Archambault said the tribe is "undaunted" by the Army's decision. Even if the pipeline is finished and begins operating, he said, the tribe will push to get it shut down.

An assessment conducted last year determined the crossing would not have a significant impact on the environment.

However, then-Assistant Army Secretary for Civil Works Jo-Ellen Darcy on Dec. 4 declined to issue permission for the crossing, saying a broader environmental study was warranted.

The Corps launched a study of the crossing on Jan. 18, two days before Obama left office, that could have taken up to two years to complete.

"I have determined that there is no cause for completing any additional environmental analysis," Acting Assistant Army Secretary Douglas Lamont said in a memo.

The Standing Rock Sioux argues that under the Fort Laramie Treaties of 1851 and 1888, the federal government is obliged to consider a tribe's welfare when making decisions that affect the tribe.

"The Obama administration correctly found that the tribe's treaty rights needed to be respected, and that the easement should not be granted without further review and consideration of alternative crossing locations," Hasselman said. "Trump's reversal of that decision continues a historic pattern of broken promises to Indian Tribes and violation of treaty rights. They will be held accountable in court."

But environmental groups, including the Sierra Club, Greenpeace, Amnesty International USA and the Center for Biological Diversity, issued statements saying the Trump administration is putting corporate profits ahead of the rights of Native Americans and the environment.

ETP has been poised to begin drilling under Lake Oahe as soon as it has approval.

Workers have drilled entry and exit holes for the crossing, and oil has been put in the pipeline leading up to the lake in anticipation of finishing the project.

ETP spokeswoman Vicki Granado didn't immediately respond to a request for comment on the Army's decision, but CEO Kelcy Warren told The Associated Press in November that the company should be able to finish the project in a little over three months once it has the go-ahead.

Those at the protest encampment have at times clashed with police, leading to nearly 700 arrests

The camp's population thinned to fewer than 300 as harsh winter weather arrived and as Standing Rock officials pleaded for the camp to disband before the spring flooding season. The Corps has notified remaining protesters that the government-owned land will be closed Feb. 22.

But Phyllis Young, a protest leader and member of the Standing Rock Sioux, believes the Army's decision may draw some people back.

Opposition to oil pipelines "is our life struggle, and we're going to continue fighting however we have to do it," she said without elaborating.

The area where the company will drill is about half a mile to the north of the protest camp, and road access is north of a highway bridge outside the camp that's been blocked by the state since October.

A frozen river and snowy hills are between the drill area and the camp. The construction area is surrounded by a wall and barricades such as razor wire.
Related topics:
north dakotaenvironmentprotestdakota access pipelineoilu.s. & worldarmypresident donald trump
Copyright © 2021 by The Associated Press. All Rights Reserved.
RELATED 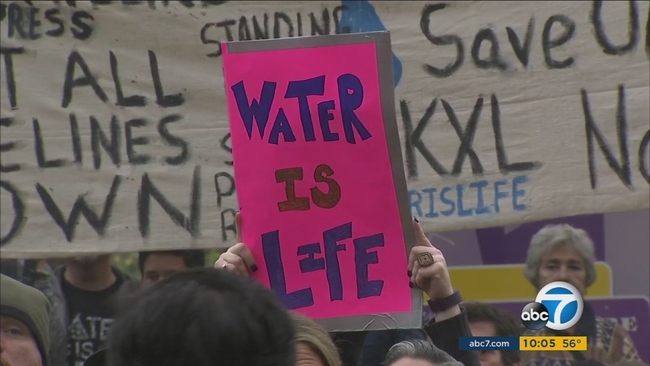 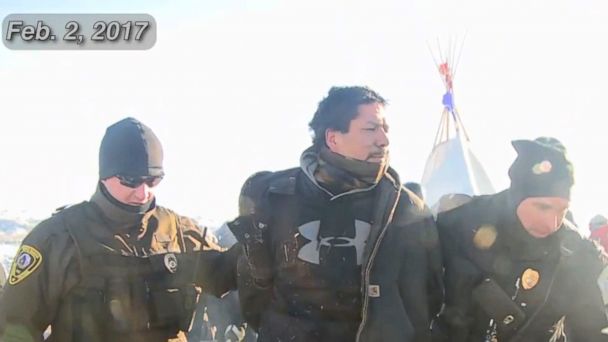 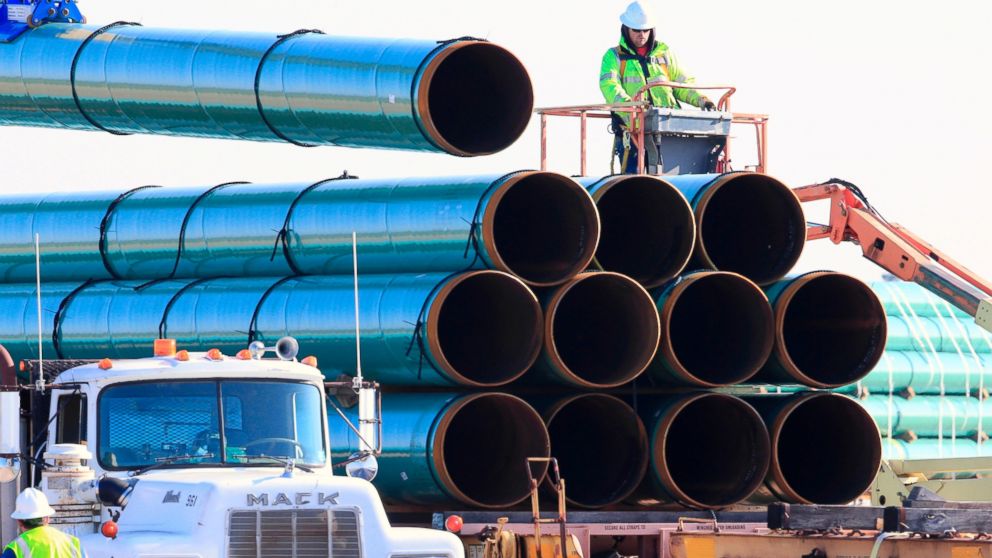